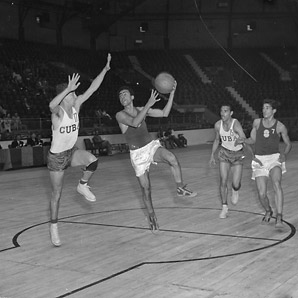 Fereidoun Esfandiary played basketball in the Olympic Games for Iran in 1948, but it was only a footnote to a much larger life. The son of Iranian diplomats, he was born in Belgium and lived in 17 countries as a child. From 1952-54 he served on the United Nations’ Conciliation Commission for Palestine. During the 1960s he wrote several works of fiction, notably The Day of Sacrifice, The Beggar, and Identity Card. In 1970, Esfandiary legally changed his name to FM-2030. He did it because he expected to live to be 100, in 2030, and in order to break free of naming conventions that he considered a relic of humankind’s tribalistic past. He noted, “The name 2030 reflects my conviction that the years around 2030 will be a magical time. In 2030, we will be ageless and everyone will have an excellent chance to live forever. 2030 is a dream and a goal.” FM-2030 taught at the New School for Social Reseach in Manhattan, UCLA, and Florida International University, and served as a corporate consultant to Lockheed, JC Penney, and Rockwell International.

FM-2030 made many predictions of the future and considered himself to have been born in the wrong century, stating, “I am a 21st-century person who was accidentally launched [born] into the 20th. I have a deep nostalgia for the future.” His predictions about future life, that have already come true, included in vitro fertilization, genetic engineering, teleconferencing, teleshopping, and telemedicine. He also predicted what he termed a “Santa Claus machine” that would effectively be a Xerox machine for three-dimensional objects, and thought that free energy from the sun would someday produce limitless resources and limit the need for competition. FM-2030 also began writing non-fiction books in the 1970s, which included Optimism One: The Emerging Radicalism and Are You a Transhuman? Monitoring and Stimulating Your Personal Rate of Growth in a Rapidly Changing World. FM-2030 died from pancreatic cancer in 2000, but in an effort to continue his life, his body was frozen and placed into cryonic suspension at the Alcor Life Extension Foundation in Scottsdale, Arizona

One thought on “Olympic Bio of the Day – Fereidoun Esfandiary”