It was announced recently that Bridgestone has signed with the IOC through 2024, renewing their commitment as a TOP Sponsor. TOP originally stood for The Olympic Programme, but was changed a few years ago to stand for The Olympic Partners. TOP was a program started in the early 1980s by Dick Pound and Juan Antonio Samaranch as a way to help make the IOC less dependent on the largesse of American television networks, which through the 1970s provided almost all the income received by the IOC and the Olympic Family. The principle of TOP was to have only a few sponsors who would pay high rights fees to be exclusive Olympic Sponsors within their category. Thus Coca-Cola could be a sponsor, but TOP exclusivity would prevent Pepsi-Cola from also joining the group. 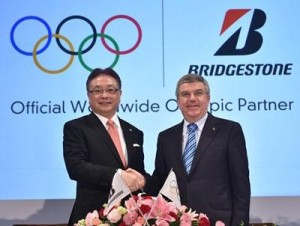 Over the years the IOC has had 29 different TOP Sponsors, starting with TOP I from 1985-1988. There have been a maximum of 12 companies in any Olympiad, after having 8 companies involved with TOP I. Below we provide a table of all the TOP Sponsors and the years they have been part of the program, along with numbers and estimates of the moneys generated by TOP. Originally the IOC announced how much money was generated by TOP, but the contracts have become somewhat more secretive so for the more recent years (and coming years), the numbers are estimates.

There have been commitments for TOP IX and TOP X through 2024 from both Panasonic and Bridgestone. Panasonic has been a TOP Sponsor for all 10 versions of the program, the only company to date with that distinction, although I suspect it is highly likely that both Coca-Cola and VISA will renew their sponsorship and join Panasonic as TOP Sponsors for every version of the program. Other long-running sponsors are McDonalds, now committed thru 6 TOP programs, and Samsung, committed thru 5 TOP programs. Of note, Coca-Cola’s Olympic sponsorship dates back thru 1928, as the longest running Olympic sponsor, well predating TOP.

A few companies have opted in for one Olympiad and never renewed. Included in this group are Acer, FedEx (then Federal Express), Johnson & Johnson, Lenovo, Manulife, Mars, Ricoh, and Schlumberger/SEMA.

One thought on “TOP Sponsorship”