Today we are going to begin looking into a topic that is very much related to Oldest Olympians: the last survivors of early Olympic Games. While in many cases these individuals lived to be over 100, not all of them did, and in two cases they did not even reach the age of 90, which means that they would have been ineligible for the Oldest Olympians table. The last survivor, of course, is not necessarily the longest-lived, as the case of Walter Walsh shows. Walsh is the longest-lived Olympian, but he competed in his 40s at the 1948 London Games, and thus there are many competitors from that edition who survived him.

One should also keep in mind that this data is based on the best of our knowledge; with so much missing information on athlete deaths, particularly from the early Games, it is possible that the last survivor died in obscurity, or without anyone realizing that they were the last one. Thus, as with all considerations regarding the Oldest Olympians, this information might change in the future. Nonetheless, we will begin this series with a look into the earliest editions, for which information about the competitors is the least well-known.

At 10 years and 216 days old, Greek gymnast Dimitrios Loundras, born September 6, 1885, was the youngest participant at the 1896 Athens Games, so it is not surprising that he was the last survivor as well. Loundras came in third in the team parallel bars event, which at the time would not have earned him a prize (the gold-silver-bronze medal structure did not emerge until 1904), but retroactively he is considered a bronze medalist. He later served in the Greek Navy and, perhaps more importantly, with the Hellenic Olympic Committee. It is because of this latter role that we know of his participation in the Games, as many of the names of the second- and third-place finishers of his event (as well as of the 1896 competitors in general) are unknown or have been lost. His date of death is given as February 15 of either 1970 or 1971, so he was aged 84 or 85 years and 162 days, but either way he was the last known living connection to the first Olympic Games. Given how much missing information there is about these Games, however, it is very possible that another individual may have actually survived longer.

Lucien Démanet, born December 6, 1874, was also a gymnast, but unlike Loundras he was well into adulthood when he débuted at the 1900 Paris Games, where he came in third among 135 competitors in the individual all-around. Again, there were no bronze medals at this edition, although he is considered a medalist retrospectively. In 1920, however, he received an actual bronze medal with the French team in the all-around event at the age of 45. In-between, he won three medals, one gold and two bronze, at the 1905 World Championships. Démanet died March 16, 1979 at the age of 104 years, 100 days, and was the last known survivor of the 1900 Games. As with 1896, of course, there are many unknown competitors, including a French boy of about seven years who helped the Dutch team win the coxed pairs event. It is possible, therefore, that a younger participant survived Démanet. 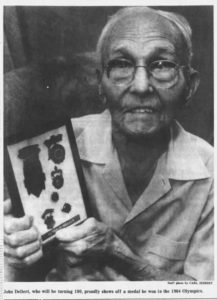 (Dellert, pictured with his 1904 participation medals, in the South Florida Sun Sentinel, on November 8, 1984)

John Dellert, born November 18, 1884, was the third of the last survivors who was both a gymnast and a competitor from the host country. Neither is surprising, as gymnasts are often younger, on average, than competitors in other sports, and the host countries of early Games tended to have far larger delegations than those of other nations, making the last survivor statistically more likely to come from there. Unlike the Loundras and Démanet, however, we know about him despite the fact that he was not a top performer at the Games: he placed no higher than 30th in the individual events and was fourth in the team all-round. He was also selected to compete at the 1908 Rome Olympics, but an injury prevented him from attending. He worked a series of manual labour jobs throughout his life and died February 3, 1985, aged 100 years, 77 days, and while there is a lot of missing information on the 1904 St. Louis Games, he is nonetheless a strong candidate for the last survivor.

There are some things that are unclear about Vahram Papazyan, but two conjectures seem very likely: that he was the youngest competitor at the 1906 Intercalated Games held in Athens, and that he was the last survivor. In the former case, his date of birth is usually seen as September 12, 1892, but his obituary and Social Security Death Index record list him as being born in 1893. This latter date seems unlikely given contemporary pictures of the athlete, but either way he would have been the youngest participant when he competed in the 800 and 1,500 metre races, being eliminated in the opening round. He is usually considered as having represented Turkey, although he was arguably an individual participant who happened to come from the Ottoman Empire. At the 1912 Stockholm Games, however, he was an official representative of the nation and competed in the same two events, with similar results. He later moved to the United States and worked as an electrical engineer, remaining there for the rest of his life and dying March 7, 1986 at the age of, at most, 93 years and 176 days. Given this (relatively) young age, and the fact that the 1906 Games are now considered unofficial and thus have not been studied as much as other editions, it remains possible that someone will be discovered who survived longer than Papazyan.

That seems like enough for one post, so we will continue this series with second and third entries in the coming weeks. Before we end today, however, we would like thank Fabio Montermini, who undertook research and used his contacts to discover that one of our Bronze Medal Mysteries, Italian sailor Antonio Cosentino, died in 1993 in Naples. We greatly appreciate the work that he did to solve this mystery and offer him our sincere thanks!

One thought on “Last Survivors of Early Olympic Games”