Today we are continuing our look into Olympians for whom we believe to have identified their date of death but, for whatever reason, we are unable to connect the information, such as obituary or public record, conclusively to the athlete. This week, we are looking into Austria, a nation that happens to have three mysteries left for us to discuss.

Like many Olympic field hockey players, there is very little that we know about Adam Bischof, born October 13, 1915, other than the fact that he was a member of the Austrian field hockey team that was eliminated in the preliminary round of the tournament at the 1948 London Olympics, after losing one game and tying two. Without information on his club, coupled with his not entirely uncommon name, we have been unable to uncover more details, although Viennese cemetery records indicate that an Adam Bischof died in September 1977 at the age of 62, which would have made him only one year older than he Olympian. Without further corroborating evidence, however, we cannot make a certain determination that this individual is the Olympian.

Bischof’s teammate Walter Niederle, born February 17, 1921, is equally mysterious. With a much less common name, one might suspect that information on Niederle would be easier to come across, but the best we could find is another Viennese cemetery record that listed a Walter Niederle as having died on November 28, 1962 at the age of 42. Although in this case the age aligns correctly with the Olympian, we still do not possess independent confirmation that the two are one and the same. 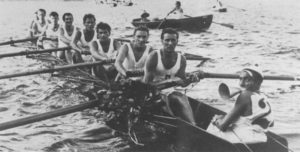 (Pictured as the individual furthest to the back whose face is visible, according to RV Albatros)

Austria was represented by a team from RV Albatros, Klagenfurt in the coxed fours event at the 1948 London Olympics, where the squad was eliminated in the quarterfinals. There is little information on the team as a whole, with the only clue about the future lives of any of the members being a Find-A-Grave listing of a Theodor Obrietan who died in 2004 and was buried in Klagenfurt. Given the rarity of his name, we are fairly certain that this is the Olympian, although we cannot prove it with certainty without additional information.

That is all we have for today, but we hope that you will join us next week, as we journey ever closer to the end of this series!

For those keeping score at home, here are the number of doping positives and disqualifications at the Olympic Games, that we know of (we = myself and @OlympicStatman). In total, there are 418 known cases.

There have been a number of tweets and other comments about the current number of doping positives from London 2012. Here are the correct numbers, to the best of our knowledge (our = myself and @OlympicStatman = Hilary Evans).

There have been 121 doping positives recorded from London 2012. 114 of these are confirmed and 7 of these are pending cases that are not fully confirmed yet.

Of the 121, 11 of these were original positives, that is, they were revealed during the London Olympics or at the time of those Olympics. Four (4) of them were pre-Games positives that were found in testing just prior to the Games with those athletes disqualified from competing. The remainder (106) of the positives have been found in re-testing.

Note that 85 of the 121 are from countries derived from the former Soviet Union.

And here are the sports that have been involved:

Finally, here are the violations, including the drugs used and the other violations of the WADA code:

Of the announced violations (114), fully 50 of them are for Turinabol (dehydrochloromethyltestosterone = DHCMT), often combined with other drugs. Why Turinabol? Turinabol was developed in the former East Germany, by the pharmaceutical company Jenapharm. It was originally only detectable for a few days after administration, but a test developed in 2012 by Grigory Rodchenkov (a familiar name in the Russian doping scandal) enabled it to be detected for up to 50 days after administration. Thus, many athletes who thought they were safe in 2012 were later detected by the use of that test.

Today we are continuing our look into Olympians for whom we believe to have identified their date of death but, for whatever reason, we are unable to connect the information, such as obituary or public record, conclusively to the athlete. This week we are looking into the Olympians who participated most recently, yet still remain part of our Olympic Mysteries series.

Andrés Amador Velasco, born November 22, 1924, represented El Salvador at two editions of the Olympic skeet shooting tournament, in 1968 and 1972, finishing 43rd and 47th respectively. This is all we know about him for a certain, but one report noted that a moment of silence was held in honor of a man by the same in September 2013. Given how uncommon his (full) name is, we suspect that this deceased individual is the Olympian, but we are unable to confirm it at this time.

Like Amador, all we know about Mariano Ninonuevo, born August 15, 1921, is his sport shooting record at the Olympics. He represented the Philippines in the free pistol, 50 metres event at the 1964 Tokyo Games, where he placed 48th. The only other clue we have been able to locate is an anonymous Wikipedia edit, which listed him as dying on May 7, 1993, but we have been unable to verify this date in any other sources.

On the other hand, we know much about Jindřich Kinský, born June 27, 1927, who represented Czechoslovakia at the 1960 Rome Olympics, where his nation finished fifth. In addition to taking a silver medal at the 1951 Eurobasket, he won eleven medals at the national championships, including gold in 1954 and 1960. He played primarily for Sparta Praha, but had a stint with ATK (now ÚDA) Praha from 1952 to 1954. Following his retirement from active competition in 1963, he had a brief career as a coach during the 1960s. The Czech-language Wikipedia lists him as dying on April 8, 2008 and, while we have no reason to doubt this, we also have seen no outside confirmation.

Finally, when we did our review of the 1936 Berlin Olympics a while back, we forgot to raise the case of Gerda Gantz, born December 17, 1915, who represented Romania in the foil competition at those Games, where she was eliminated in round one. At the end of 2017, an anonymous user suggested that she died February 2, 2001 in Jerusalem, but, as is often the case, we were unable to verify this elsewhere.

That brings us to the end of this blog entry, but we hope that you will join us next week, when we start wrapping up this series so that we can move on to other mysteries!

Happy New Year everyone! Today, we are continuing our look into Olympians for whom we believe to have identified their date of death but, for whatever reason, we are unable to connect the information, such as obituary or public record, conclusively to the athlete. Two weeks ago, we went north of the American border to look into Canadian Olympians; this week we are headed south, to examine some Mexican Olympic mysteries.

We know little about Rodolfo Flores, born 1921, who represented Mexico in two pistol shooting events 1956 Melbourne Olympics, finishing 19th and 26th in the rapid-fire pistol, 25 meters and free pistol, 50 metres respectively. An anonymous edit to Wikipedia claimed that he was born December 16, 1920 and died October 28, 1982 in Houston, Texas. While the Social Security Death Index does reveal that a Rodolfo Flores Sr. died on that date in Harris County, Texas, it does not contain a date of birth, let alone any facts that might connect the deceased individual to the Olympian, and we were unable to uncover an obituary that might turn up more clues.

Much like Flores, we have limited information on Juan Frias, born September 24, 1918, who represented Mexico in Dragon class sailing at the 1964 Tokyo Games and finished 18th. Again, the Social Security Death Index gives us a lead, as a man by the name and with that date of birth died in Texas on August 13, 2004. In this case, we were able to locate an obituary, but it contained no information to help clarify whether or not the man who had died was the Olympian.

Juan Trejo, born May 12, 1927, represented Mexico in water polo at the 1952 Helsinki Olympics, where his nation was defeated by upcoming gold medalists Hungary in the qualifying round. He was later involved in organizing and promoting the sport in his home country and with his full name – Juan Trejo Cid – being somewhat uncommon, it seemed likely that he would receive a clear obituary upon his death. All we could find, however, was a brief notice for a Juan Trejo Cid who died in Mexico City on November 6, 2012, which offered no details, not even an age at the time of death. We suspect that the individual mentioned in the Olympian, but we have thus far been unable to prove this.

We are including one more individual than usual, Emma Ruiz Velásquez, born January 26, 1922, because it is a somewhat different case than our ordinary ones. Ruiz represented Mexico in foil fencing at the 1948 London Olympics, where she was eliminated in round one after losing all of her bouts. This was the last we heard about her until July 2014, when an anonymous user on Wikipedia claimed that she was alive and living in Caracas, Venezuela. That alone would be enough to merit an Olympic Mysteries post, but then we uncovered an obituary claiming that an Emma Ruiz Velásquez died in Caracas on December 9, 2014. Without an age or any substantial details, we could not verify that this was the Olympian, but it certainly does provide an interesting case.

A little bit extra today to start the new year off strong, and we will be back with more Olympic missing links next week. We hope that your new year is off to an equally strong start (or better) and hope to see you in a week’s time!