Some readers of this Olympic blog may remember a post I did at the end of the Rio Olympics concerning our statistical site on www.sports-reference.com/olympics – https://olympstats.com/2016/08/21/the-olymadmen-and-olympstats-and-sports-reference/.

The Olympedia research site contains the profiles and results of all Olympic athletes and informative descriptions about the Games, events, venues, and much more. It is the most comprehensive database about the Olympic Games and is the result many years of work by a group of Olympic historians and statisticians called the OlyMADmen.

Here are some examples: 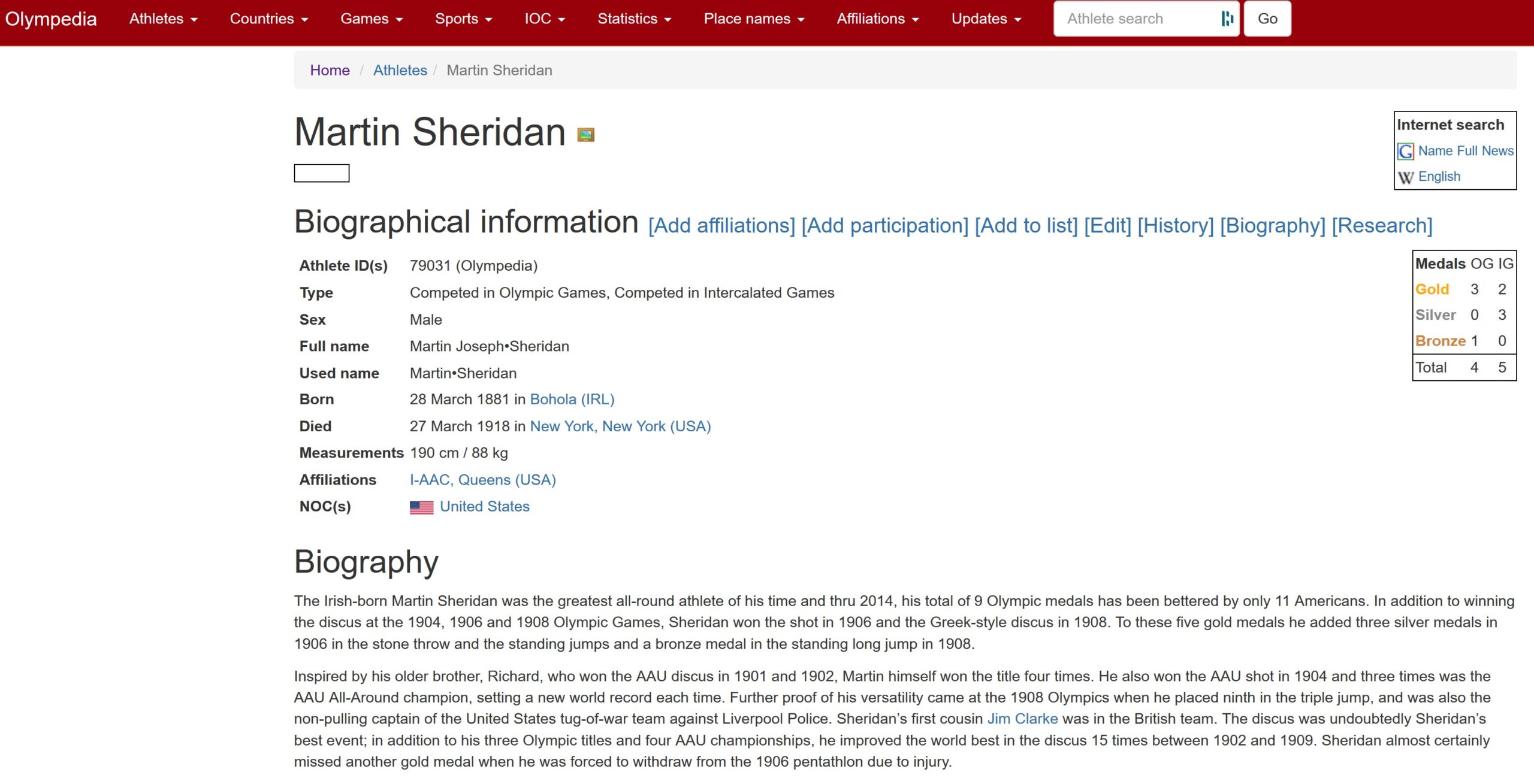 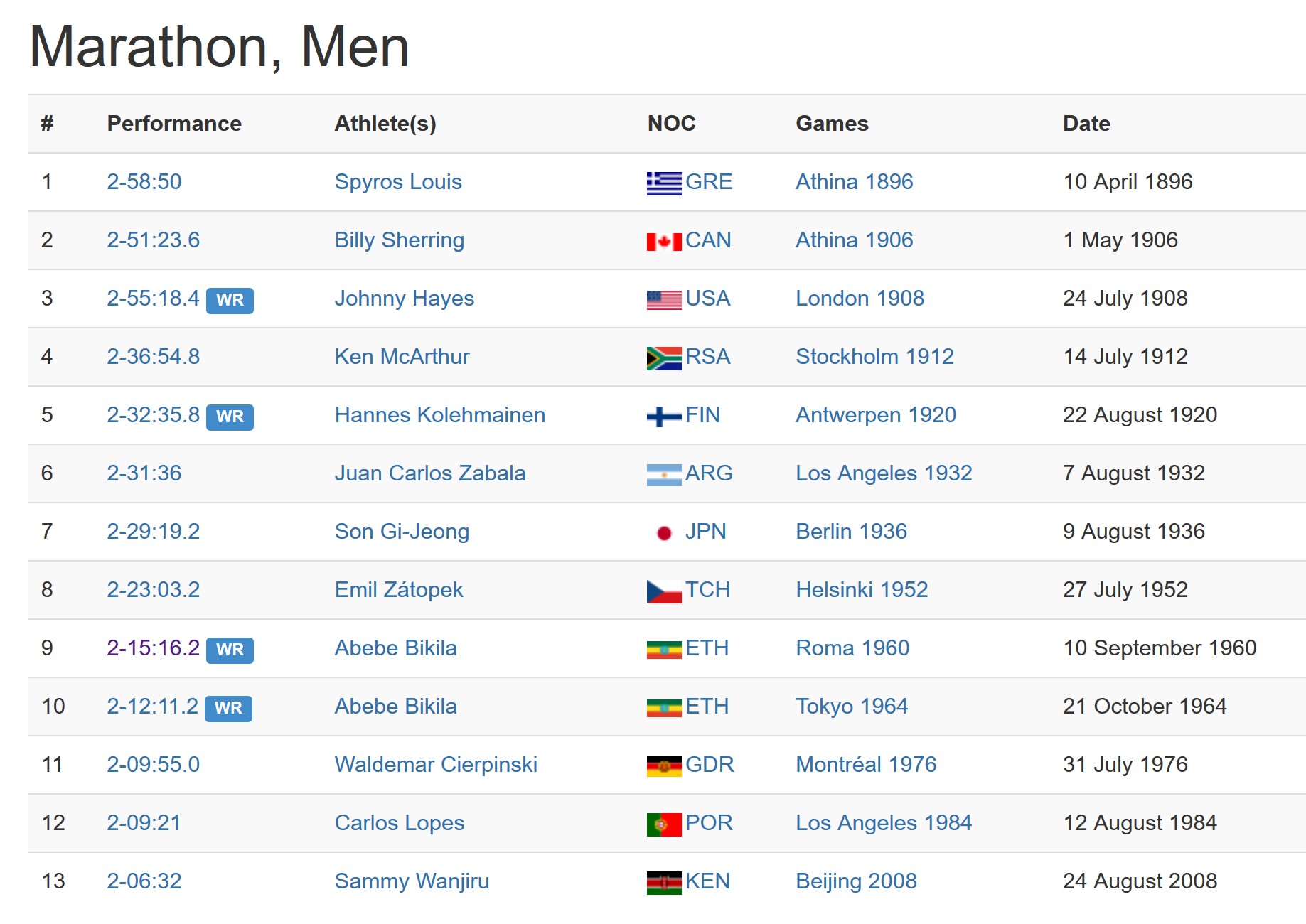 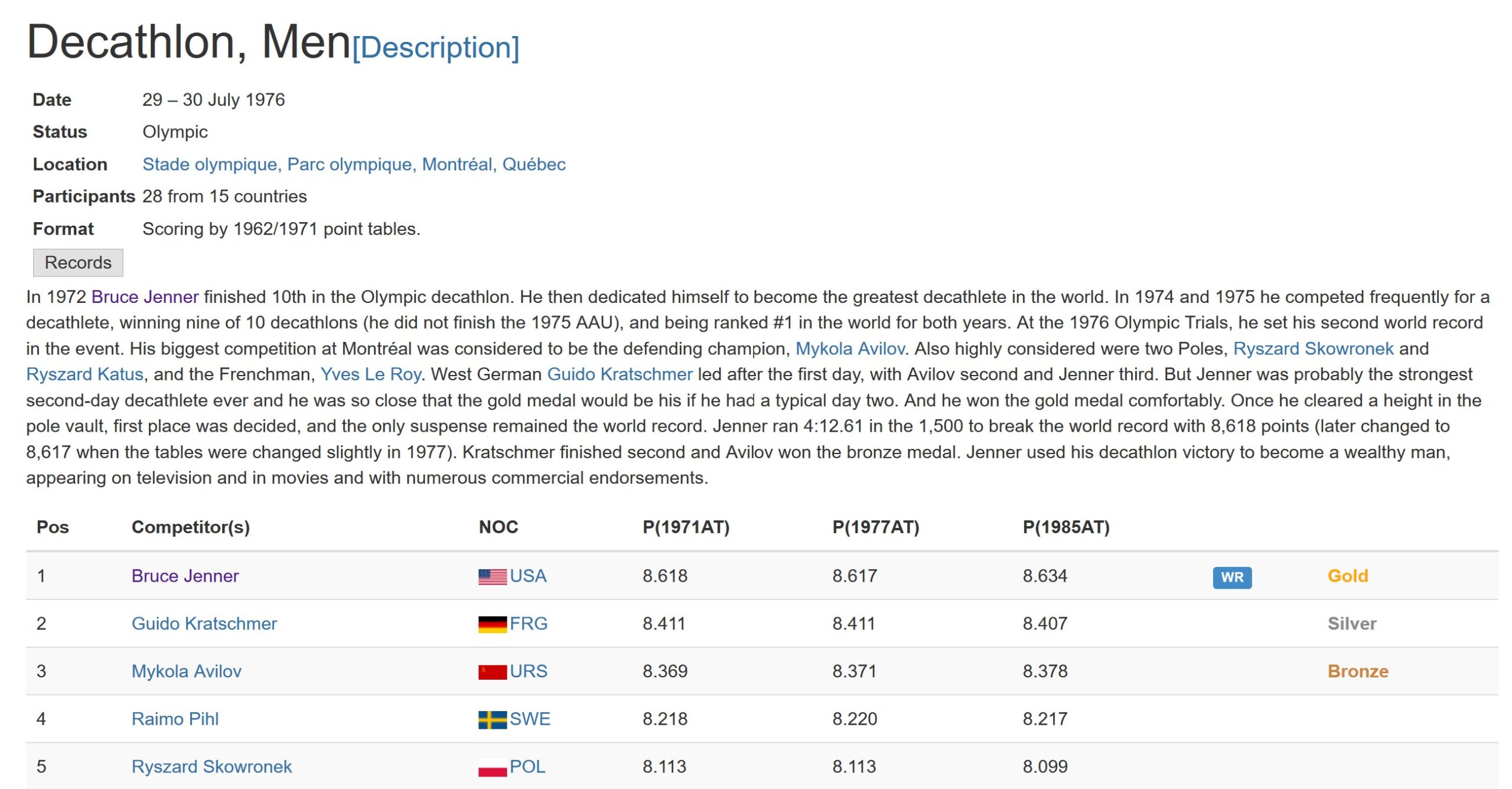 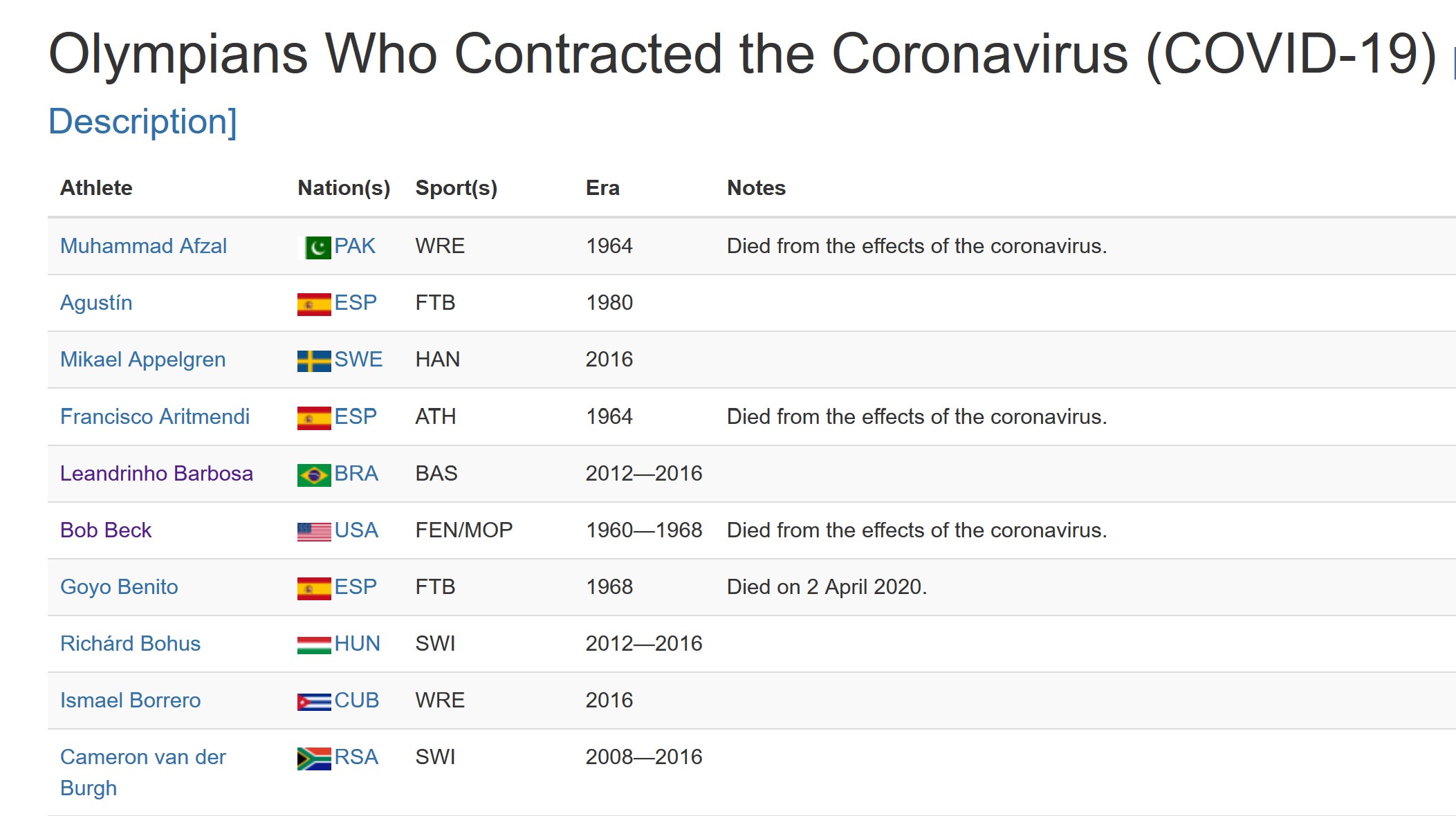 Olympedia has always been a product solely of the OlyMADMen and has been a private site that required a password that only we could grant. Olympedia has recently moved to another server, but during this time it has still required password access and did not have open access.

We have recently received permission to open Olympedia to the public, and it will no longer require a password. We thank the International Olympic Committee for working with us on this project, and granting us this permission. We are excited and hope you will be, too.

Olympedia contains all of the information that was previously on sports-reference/Olympics – and actually much more – it is far more detailed. Welcome to Olympedia, the most detailed internet reference source on the Olympic Games and the Olympic Movement – www.olympedia.org

Today on Oldest Olympians we are looking into the possibility that two Olympic athletes by the name of Ahmed Labidi are in fact just one individual. While we have a fairly strong feeling that they are one and the same, we wanted to open this issue up to everyone in the hopes that we can uncover some conclusive proof.

The first individual under consideration is known by the full name of Mohamed Ali Ahmed Ben Labidi and was supposedly born April 19, 1923. Representing CA Montreuil, he competed for France in the 10,000 metres event at the 1952 Helsinki Olympics and placed 25th among 33 starters. This individual continued representing France through 1955, after which there is no definite information on him. This coincides roughly with Tunisian independence in 1956, after which it is possible that he resided in Tunisia.

The second individual is known by the full name of Ahmed Ben Dali Labidi and was allegedly born May 4, 1922 in Gammouda, Tunisia. A member of Zitouna Sports, he represented Tunisia in the marathon at the 1960 Rome Olympics, finishing 49th among 69 starters. Beyond his Olympic participation, we know nothing further of this individual.

Two sources tie these individuals together as one. The first is the French Wikipedia, which also claims that he died on July 17, 2008. The other is a Tunisian Facebook page, although the only source that it lists for this claim is Wikipedia itself. On the surface, there is nothing glaring to signal an immediate rejection of this claim: they have roughly the same name, are roughly the same age, and competed in roughly the same discipline.

We are contacting the individuals associated with these posts in both Arabic and French in the hopes of learning more and finding some manner of confirmation. In the meantime, we wanted to post about it on this blog not only in the hopes that someone who sees it has some information that might help solve the mystery, but also to present a case that we feel might be of some interest to our readers. As always, we hope that the process of our research, as well as highlighting areas of potential confusion, are worth hearing about.

Today on Oldest Olympians we are looking at a quartet of mysteries sent to us by Harri Piironen. All of them concern Finnish Olympians who are believed to have immigrated to North America and subsequently disappeared from the public record.

Jussi Kivimäki, born February 5, 1885, represented Finland in the light-heavyweight, Greco-Roman wrestling competition at the 1908 London Games. There, he received a bye in round one, but then lost by decision to Jacob van Westrop of the Netherlands in round two and was thus eliminated from the tournament. The Helsinki champion of 1907 and 1908, he next competed at the unofficial 1909 European Championships, where he was sixth, and then immigrated to North America.

Here sources differ: most everyone agrees that he was a professional wrestler in Canada for a time after 1910. Some believe that he changed his name to John Kivimäki or John Thompson. At least one researcher believes that he might have been Ole Samson. Some believe that he was a member of the Finnish Workers’ Sports Federation during the 1920s and 1930s; others think that this is a misidentification. Regardless, no one has been able to locate a date of death and thus he was declared dead in absentia with a retroactive date of January 1, 1976.

Emil Holm, born September 2, 1877, represented Finland in the three positions, 300 metres shooting tournament at the 1912 Stockholm Games, where he was 49th individually and 5th with the team. The following year, his building firm went bankrupt and he fled to the United States, possibly settling in Galveston, Texas. Former fencing Olympian, and now researcher, George Masin discovered Holm in the draft registry for World War I dated September 12, 1918, living in Houston and with a next-of-kin as his Siri Regina Holm of Helsingford. Emil was declared dead in absentia with a date of January 1, 1968.

Kalle Leivonen, born September 17, 1886, represented Finland in the featherweight, Greco-Roman wrestling tournament at the 1912 Stockholm Games. There he survived until round seven, only to be defeated by upcoming silver medalist Georg Gerstacker of Germany. Two years later, Leivonen immigrated to the United States.

(Account of Leivonen’s accident, from the May 26, 1927 edition of the Fitchburg Sentinel)

We located records of Leivonen’s arrival in Massachusetts in 1914, where he ran a business and lived until at least 1927. That year, he was rescued after nearly drowning in an automobile accident. Evidence suggests that he was living in Manhattan by 1930, but after that our trail went cold. Without further information, he was declared dead in absentia as of January 1, 1978.

Hannes Kärkkäinen, born July 17, 1902, is perhaps the most mysterious of all. He represented Finland in platform diving at the 1924 Paris Games, where he placed ninth. He is known to have left Finland in 1926, but after that his movements are not certain. One theory is that he emigrated to the United States and eventually died in North Sterling, Connecticut. The other is that he was the Juho Juhonpoika Kärkkäinen who was killed in the Soviet Union’s Great Purge in 1938. As neither theory has been proven, he is listed with a death in absentia date of January 1, 1993.

Today on Oldest Olympians we are presenting a relatively straightforward mystery regarding a single Olympian: Lebanese wrestler Zakaria Chihab. Chihab was born March 5, 1926, but there is no question as to whether he is alive or if he became one of the oldest Olympians. Our hope, as with the last blog about Maurice Lefèbvre, is simply to find out when he died despite the conflicting information.

As a prominent international wrestler of the 1950s, most of the details of Chihab’s life are not in question. Always competing as a bantamweight, he took silver in the Greco-Roman division and bronze in freestyle at the 1951 and 1955 Mediterranean Games respectively. Undoubtedly his greatest achievement, however, was in becoming Lebanon’s first Olympic medalist by winning silver in the Greco-Roman competition at the 1952 Helsinki Games (his wrestling compatriot Khalil Taha earned bronze as a welterweight later that day). He also attended the 1953 World Championships, placing sixth, and ran a fitness club after his retirement. At some point in the 1970s, he moved to Kuwait to work as a coach with the army.

He lived out the rest of his days in Kuwait, so it is known that he died there, but sources differ on when exactly that was. The Arabic-language Wikipedia lists 1996 but, predictably, without a source. With that said, we were able to locate an old article (since removed but archived) from July 8, 1996 that mentioned he died “years ago”.

Thus Wikipedia’s date of 1996 was incorrect, but an understandable error. With that, for many years we simply had a best guess of “sometime in the 1990s” for his date of death. Then, in December of last year, an anonymous user from Kuwait added a more precise date of December 1983 to his English Wikipedia article. Of course, if a source had been included, we would not be writing this entry. Thus, while we have no reason to doubt this date, we have been unable to verify it either. Perhaps, much as with our review of Egypt’s earliest Olympic medalists when we first began this blog, our mystery is only half mystery, and half a sad tale of a forgotten prominent sportsman.