So we did a recent post on Olympians who have made more than one appearance at the Olympics. One of the replies we got back was that it would be interesting to know more about this as it relates to the best known summer Olympic sport – athletics (track & field). So here we go.

Who has appeared in each event the most times? Seven athletes have competed in the same Olympic athletics event 6 times, with Merlene Ottey doing this in 3 events – the 100, 200, and 4×100 relay – for 9 occurrences in all. But we’ll go further and list who has appeared in each track & field event the most times below, requiring at least 4 appearances. The list for each event is as follows:

Now looking at the event-by-event appearance records, we note that 6 athletes (5 women, 1 man) competed at least 3 times in 3 events. They are as follows, with the Jamaican wonder woman Merlene Ottey having competed 6 times in 3 different events:

So who has competed in the most Olympic track & field athletics events? This gets a little complicated. Prior to 1928 there were a number of events no longer on the Olympic Program – standing jumps, odd walk distances, both hands throws, freestyle javelin, cross-country, various team races, and so on. In addition, we count the 1906 Olympic Games, which the IOC does not (they should). Here is the list of who has competed in the most athletics events, counting all events on the Program. The column on the left does not include 1906, while the second column in includes 1906, which brings in Martin Sheridan, who would be #3 if 1906 is included (I am required to mention Sheridan by my Chocolate Lab, Marty, whose full name is Martin Sheridan Mallon).

As you can see, and will see even further, Merlene Ottey and Eric Lemming are the queen and king of track & field appearances. Ottey leads this list, but Lemming would be #1 if we count 1906, at which Games he started in 8 events.

Its evident that most athletics Olympians compete in only a single event, and over 92% compete in 3 or fewer events.

Now Merlene Ottey competed in 19 events but she competed in a lot of relays, 7 in all. What happens if we only look at athletics Olympians competing in individual events? Again we have 2 columns, one not including 1906, and the second column including 1906, which adds Sheridan (sorry, its required), Ray Ewry, Meyer Prinstein, and Lawson Robertson. Note that Lemming’s figures do not change – he competed only in individual events.

And here is the breakdown of track & field Olympians by number of individual events in which they have competed – again including 1906 and all events.

As you can see, when looking only at individual events, by far most athletes compete in only a single Olympic track & field event.

Here is the list if we include all track & field events that have ever been on the Olympic Program. A familiar face leads the list, but you will note that the top 4, who competed in 8 and 7 events, all did so in 1906. Sheridan actually entered 15 events in 1906, but got injured in the pentathlon and withdrew from a number of them.

So this is probably the list you’re looking for – most events at a single Olympics, counting only modern events, but including individual events and relays. Lemming is at the top with 6 in 1900, with 8 men who competed in 5 events in various years (none 1906), and Marion Jones in 2000 was the only woman to ever compete in 5 track & field events at a single Olympics. Or did she really compete? Maybe she has been erased – see the movie “Eraser” with Arnold Schwarzenegger, Vanessa Williams, and James Caan.

Now yesterday Galen Rupp qualified for the 2016 US Olympic marathon team, and is talking of also running the 10,000 in Rio. Remember 1952, when Emil Zátopek won the 5,000, 10,000, and marathon? (I don’t remember it too well – I was 5-months-old) Has that ever been done before or since? In London the doyen of Olympic beat writers Phil Hersh asked me to dig up some data about how common is it now for athletes to compete in multiple related events, such as the Zátopek triple. So we looked at a few of those.

How about the Zátopek triple of 5K, 10K, and marathon? This has been done 17 times, and there are some pretty famous names in this group. Besides Zátopek, Lasse Virtanen (FIN) did it in 1932, and his countryman, Lasse Virén, did it in 1976, winning the 5 and 10, and placing sixth in the marathon. Ron Clarke ran all 3 events in 1964, and in 1968, Ethiopian Mamo Wolde and Kenyan Naftali Temu ran all 3 long-distance events, with Wolde winning gold in the marathon, and silver in the 10K, which was won by Temu, who also won a bronze in the 5K.

At London in 2012 American Will Claye competed in the long jump and triple jump, as did Australian Henry Frayne. This is pretty common as this made 142 times this has been achieved at a single Olympics.

Let’s not forget the big guys and gals, the weight throwers. Shot put and discus throw is a common double for the throwers to pull off. In fact, its been done 185 times at the Olympics, most notably by Soviet Tamara Press, who won both events in 1968, and in 1964 won the shot put and won silver in the discus. In 1906, Martin Sheridan also won both events – there, I got him in again.

Have any throwers ever competed in more than 2 events? Of course they have – why else would I bring it up? Between 1900-24, 13 throwers competed 14 times in 3 or more of the weight throwing events (shot, discus, hammer, javelin). American Ralph Rose did it in 1904 and 1912, competing in the shot, discus, and hammer each time, winning a complete set of medals in all three events in 1904 – gold in shot put, silver in discus throw, and bronze in hammer throw. Perhaps most remarkably, in 1908 Britian Henry Leeke competed in all four throwing events, the only time this has been done at the Olympics.

So this should answer pretty much any question you had about who has competed in the most track & field athletics events.

With thanx to my research associates, Martin Sheridan Mallon (the lab) and Barney Rubble Mallon (the Westie) 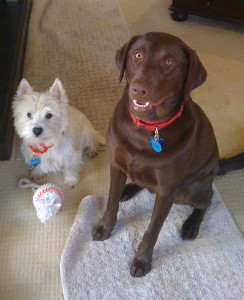 On the day of the Olympic marathon in Rio, Meb will be 41 years, 108 days old (41-108). That’s relatively ancient for a world-class marathoner, but far from unheard of. In fact, there have been 21 Olympic men run the Olympic marathon at an older age, led by Canadian Percy Wyer, who ran the 1936 marathon when he was 52-years-old. Here is the top 25 through 2012:

What about among US men Olympic marathoners, you surely are asking? Meb will become the oldest American man to run the marathon at the Olympics, with the current oldest being Johnny “The Elder” Kelley at London in 1948. Meb’s 2012 London marathon already put him 6th oldest among US men. Here is the US top 10 list:

Shalane Flanagan will also run in her 4th Olympics, after racing the 5K in 2004, the 5 and 10K in 2008, and the marathon in 2012. Flanagan will be 35 years old in Rio. How does that stack up against female Olympic marathoners in terms of senescence? Here are the lists for the top 25 oldest women to run the Olympic marathon and the USA top 10 list:

Its not actually that rare and further, its becoming more and more common for athletes to compete in 2 or more Olympics. That is especially true of the Winter Olympics. We will only examine the Games since World War II, since the 12-year gap between 1936 and 1948 will skew all results, and this brings us closer to the modern era.

Here are the overall tables for both men and women Olympians at the Summer and Winter Olympics:

So its fairly common to compete in more than one Olympics, although overall only about 30% of Olympians get to a second Games. You’ll note, however, that Winter Olympians do it more frequently than summer Olympians – 34.1% to 25.7%. And women seem to come back to a second Olympics slightly more often than do men.

It is likely that the 2008 and 2010 numbers will eventually end up with a higher percentage for the 2+ Olympians, as some of those competing in 2008 and 2010 will likely compete in 2016 and 2018. The numbers seem to be increasing and if we look at a graph and determine a best fit for the numbers, its fairly obvious that more and more athletes are competing in 2 or more Olympics. 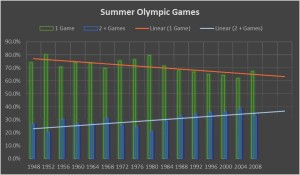 And here is the graph for the Winter Olympics, where there is now almost equilibrium between 1-time Olympians and those competing in 2 or more Games. 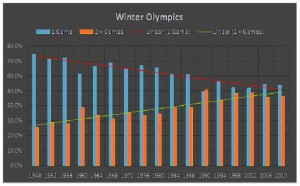 The biggest spike for the Winter Games occurs between 1992 and 1994, when the Winter Olympics had their only gap of 2 years between Games.

Now which sports are particularly suited to Olympians competed more than one time? This is as you would expect, with equestrian, fencing, and shooting figuring prominently. But there are a few surprises, and this time we will look at how often Olympians compete 4 or more times, and 6 or more times. Here is the list by sports for the Summer Games – this include all Olympics since 1896:

Here is the similar list for the Winter Olympians, looking only at 2+ and 4+ Olympians:

Not too surprising is that luge sliders compete in more than one Winter Olympics more frequently than other Winter sport Olympians. But it is surprising that biathletes do so almost as frequently as lugers, and biathlon is a very physically rigorous sport. We really can’t explain that.

So if you want to compete in more than one Olympics, pick your sport carefully, and realize you have a much better chance of doing this than your parents or grandparents did.