As we have no updates to share on the subject of last week’s blog, ski jumper Bob Lymburne, and with Canada Day being celebrated tomorrow, we thought that this week we would look into another Canadian Olympian whose mystery is much simpler: fencer Alf Horn. 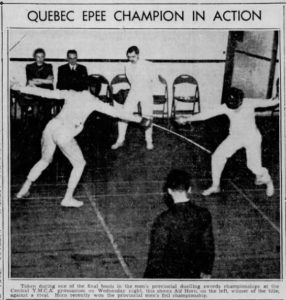 Horn was born in Norway on January 6, 1913, but moved to Canada at a young age and, after dabbling in track and field, focused his athletic talents in fencing. He was quite capable in this regard, and won several Quebec provincial championships across the disciplines. His biggest moment in the sport came when he was selected to represent Canada at the 1948 London Olympics, where he took part in every event except the individual sabre, but never advanced beyond the second round. His sporting career wound down after that, but he remained active in coaching and administration and, as late as December 1967, was mentioned among “well-known Montreal sportsmen”: 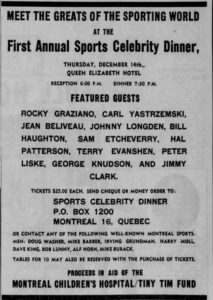 (Advertisement from the December 9, 1967 edition of the Montreal Gazette)

With this mention being the last evidence we have of him being alive, the mystery is simply this: what happened to Alf Horn after the 1960s? Of course, as we have covered, there are many Olympians, even well-known ones, that have simply disappeared from the record later in life, so this question in and of itself would not make him more mysterious than thousands of other Olympians. We were, however, able to locate one perplexing clue that makes his case worth discussing. 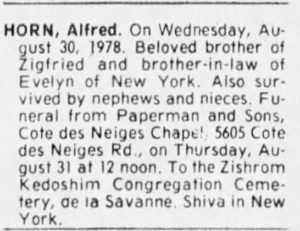 The above obituary appeared in the August 31, 1978 edition of the Montreal Gazette, but unfortunately does not provide any evidence that the individual listed was the Olympian. It mentions relatives, but no children, and we were unable to track his named brother and sister-in-law to uncover more clues. Finally, one piece of information that it does give, that the deceased individual was Jewish, does not align well with the Olympian’s long-time affiliation with the YMCA, as the Montreal YMHA was also well-known for its sports programs and sent several basketball players to the 1948 Games.

We were able to locate the cemetery in which he was buried, the Baron de Hirsch Cemetery, but, unfortunately, his Find-A-Grave page offers no additional details beyond the obituary and does not include a picture of the grave. Still, there is nothing that disqualifies him from being the Olympian (the fencing program at the YMCA, for example, might have been better than the one at the YMHA, or the YMHA might have been too far away for him to travel routinely during his youth) and we could locate no other suitable obituaries. Thus, for now, it seems, Horn’s later life will remain an Olympic mystery.

Today on Olympic Mysteries, we are revisiting an Olympian that we covered before, whose circumstances are truly deserving of the word “mystery”: Robert Samuel “Bob” Lymburne. We were, unfortunately, unable as of yet to his resolve his case, but we did uncover further information that we feel is worth sharing.

As we covered previously, Lymburne represented Canada in the ski jumping tournament at the 1932 Lake Placid Olympics. There, he placed 19th out of 34 starters in the normal hill. In the sporting world, however, he was more notable for his achievements outside of the Games. On March 13, 1932, he set a world record of 82 metres (269 feet) with a jump in Revelstoke, British Columbia. He lost his record in less than a year, but regained it in March 1933 with a jump of 87.5 metres (287 feet). Unfortunately, he suffered a severe head injury while skiing in 1935 and never competed again. According to the book Powder Pioneers:

We do not know the origins of this story, as the earliest version we could locate was in Powder Pioneers, written in 2005. Thus, we do not even know when his disappearance is alleged to have occurred or in which woods he vanished.

In regards to the first issue, we now have at least a little more clarification. Some sources list him as having disappeared in the 1930s, but we were able to locate numerous references to him being alive well after that. The latest mention we could find comes from The Province, a newspaper from Vancouver, which published a picture of him on March 11, 1957, leaving no ambiguity to the fact that he was still alive at the time: 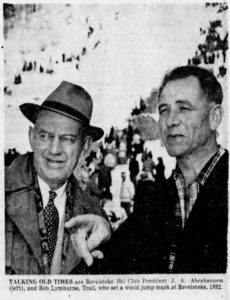 At the time, he was living in Trail, British Columbia, but online records for the province do not contain any documents relating to his death. What we did find, however, was his marriage registration from November 19, 1939, when he married Alice Luella Threatful: 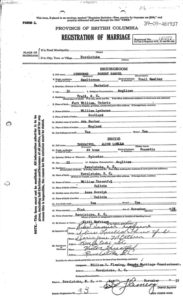 Interestingly enough, his surname is listed on this document as “Lynburne”, a spelling that occurred occasionally in newspaper accounts about his career, despite “Lymburne” being far more common. We were also hopeful that the discovery of a wife might have led to new family details. Unfortunately, Alice died less than a year after their marriage, with a record that also lists her surname as “Lynburne”:

Other family information led to even more questions, as the death certificates of both of his parents are listed under “Lymbourne”. Adding to the confusion, two of his sisters, Mary and Sarah, have marriage registrations in the same records with the surname “Lymburne”. In fact, on the death certificate for Harry Prestwich (mistakenly listed as “Prestwick” on his own marriage certificate!), Mary’s husband, his wife’s maiden name is spelled “Linburn”. It was the name “Lymbourne”, however, that provided more definitive clues, as features on the Lymbourne Family were featured in The Golden Star on July 12 and 19, 1978. In the article, it mentions that the two boys, Frederick and Bob, and are deceased: 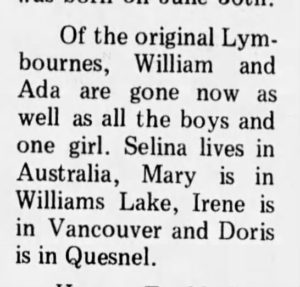 (Clipping from the July 19 article)

Frederick died December 20, 1970, with his death record listing Lymbourne, but there is no trace of Bob’s death in the archives. Thus, this is where the trail in public records seems to go cold. We now know that Bob died between 1957 and 1978, but we could not locate a record of this in any public documents. If he disappeared in the woods, as is claimed, then it is possible that he was never declared dead officially, or that such a declaration took place in a different province or during a time where the British Columbia records remain sealed. That said, the earliest iteration of the “walked off” story we have seen is still from the 2005 Powder Pioneers mention, so we cannot even verify that that story is true. Our next step, therefore, will be to attempt to contact the author of that book, as well as some of the descendants of the Lymbourne siblings, in the hopes that we can move closer to solving this mystery. In the meantime, however, we thought that you our readers might enjoy an update to the progress being made in this case.

Today we wanted to continue to keep our blog simple by maintaining our focus on individual athletes and concentrating today on an Olympian who would have recently turned 90 were he alive, but is otherwise a bronze medal mystery. During the course of our work, however, we noted that there was another bronze medal mystery that we missed when we undertook our original series on this topic, and thus today will be a double feature as we rectify our previous oversight.

Valnetin Prokopov, born June 10, 1929, is probably best known as the player who struck Ervin Zádor in the famous “blood in the water” water polo match at the 1956 Melbourne Olympics. With the Soviets having just invaded Hungary to quell an uprising, tensions were high during the game, which quickly turned physical. The match was called in favor of the Hungarians when, with his opponents already ahead 4-0, Prokopov attacked Zádor and opened a cut beneath his eye, causing him to bleed profusely. The Soviets eventually settled for bronze in the tournament, while the Hungarians went on to win gold.

With the Russian-language barrier, there was little else that we could find on Prokopov, although we know that he had taken part in the 1952 Helsinki Games as a member of the Soviet water polo team (which finished seventh) and was scheduled to compete in the 1,500 metres freestyle, although he did not start. He also won three national championships in water polo, in 1956, 1959, and 1964. We suspect that he is still alive, and that the main obstacle is the language but, unfortunately, we could not find anything to confirm our suspicions. 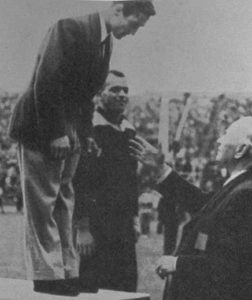 (Baumann on the podium, in the center of the photograph)

We know even less about Swiss wrestler Hermann Baumann, born January 23, 1921, which is probably why we accidentally overlooked him before. Baumann represented his country in the lightweight, freestyle event at the 1948 London Olympics, and earned the bronze medal by defeating Italian [Garibaldo Nizzola]() in a tie-breaking match. Unfortunately, there is much less information out there on Swiss Olympians than one might expect, and thus this is all we know about him. Unless and until someone can provide additional information, Baumann will remain a bronze medal mystery to us. 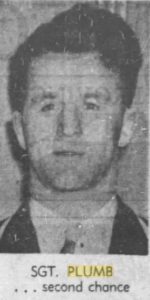 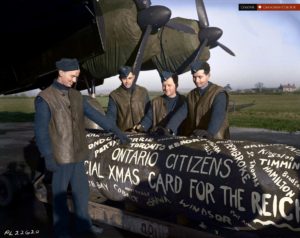 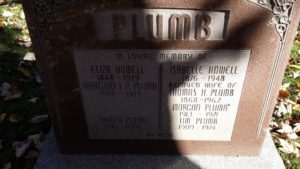 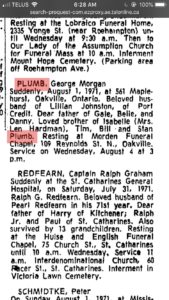