Continuing with our theme of the 1900 Paris Olympics, today on Olympic Mysteries we are looking into another case muddled by uncertainty, that of French fencer Viscount de Lastic. One might assume that if anyone from the 1900 Games were to be remembered, it would be a member of the nobility. Unfortunately, at the time, the Olympics had yet to distinguish itself from other international sporting tournaments and, with the Paris Games further diluted in importance by being mixed into that year’s World Fair, many may not have even been aware that they were participating in the Olympics, let alone have found it prestigious enough to be worth special mention. If this were the case for the average sportsman, then certainly it would be more so for a member of the nobility whose life would have revolved around many uncommon exploits, and for whom participation in the first round of a fencing tournament may not have been of particular note.

What we know for certain is that a man holding the title of Viscount de Lastic took part in the individual épée competition at the Paris Games and was eliminated in round one of the event. He was neither the only member of the nobility taking part nor was he the highest-ranked. Gabriel, Count de la Falaise, for example, finished fourth in this event and won the sabre tournament. 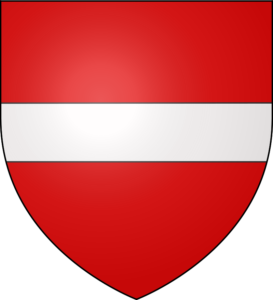 (The Coat of Arms for the de Lastic family)

The de Lastic family has been around since at least the 11th century, leaving many potential branches to explore. We suspect, however, that Viscount de Lastic was actually Hubert Jehan de Lastic Saint Jal, but we are unable to confirm it. He was born January 15, 1874 and died June 1, 1965 at the age of 91, which would have at one time, appropriately enough, made him among the Oldest Olympians. 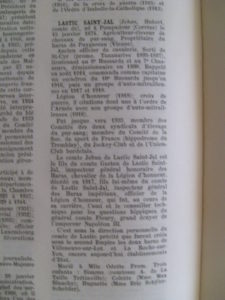 According to one biography, this de Lastic was a cavalry officer and a sports patron, both of which would align well with an interest and competitive history in fencing. He was decommissioned in 1908, but called back to serve with the 10th Hussards during World War I. After that, he seems to have spent much of his time active in various sports administration roles in France.

There is nothing to suggest, therefore, that Hubert Jehan de Lastic Saint Jal was not the Olympic fencer but, unfortunately, there is nothing to confirm it either. Given his extensive sports patronage and decorated military career, there would seem to be little reason in any biography to mention his single-round participation in a fencing tournament nestled within the 1900 World Fair. Although by 1965 participation in the Olympics would certainly be worthy of note, if there is an obituary that mentioned this fact, we have not seen it. Thus, despite all of the supporting evidence, the case of Viscount de Lastic must remain among our Olympic mysteries.

If there is one edition of the Olympic Games more mysterious than 1904 St. Louis, from where we covered last week’s blog subject, it is the 1900 Paris Games. Today’s subject, Huger Pratt, has less of a connection to the Olympics than Julius Schaefer, but no less mystery surrounding him.

Pratt, who was born c. 1857 in California, took part in the golf tournament at the 1900 Olympics, but only participated in the handicap event, which is not considered an official Olympic competition, and finished joint-eighth. He was entered in the Olympic contest, but did not actually take part. His wife, Abbie Pratt, had more luck, coming in third place in the women’s event. Both Pratts were among the social elite and were frequent visitors to France, even though they were American. 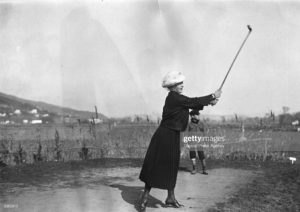 Huger was not Abbie’s first husband. She had been married previously to Herbert Wright, with some sources listing him as having died in 1880, although most noting that the two were divorced at some time in the 1890s. Her marriage to Pratt, which occurred perhaps very shortly prior to the Games, is where the Olympic mystery begins.

For a long time, Pratt was believed to have died in 1905, as he is listed as alive in the New York Social Register in 1904, but deceased in 1906. Yet according to one researcher, Pratt, who had possibly been involved in financial speculation in the 1880s, was listed as deceased in 1907 in the 1908 edition of that same publication.

(Clipping from an 1883 edition of The Weekly Underwriter)

The confusion, it seems, comes from Pratt himself. In November 1907, a scandal hit American newspapers when it was revealed that Abbie was living in Cleveland with her mother, because she had “not seen her husband for some months and [did] not know where he [was]”, and was thus planning on bringing suit for divorce. The Pratts, who according to the article had been married in 1896, had been living in Paris until he disappeared, presumably voluntarily. 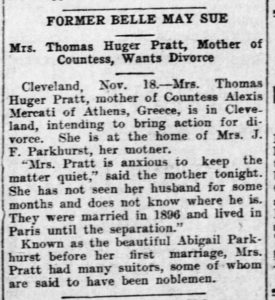 (Article from the November 19, 1907 edition of The Leavenworth Times)

After that, we were unable to uncover the resolution of that situation, or even be certain whether or not Huger eventually reappeared. It is well known, however, that Abbie married Prince Alexis Karageorgevich, a claimant to the Serbian throne, in 1913, and lived the rest of her days as Princess Daria Karageorgevich. But what happened to Huger Pratt? Given his history, it is not surprising that he disappeared from the record, but we did locate one mention of him dying in 1912: 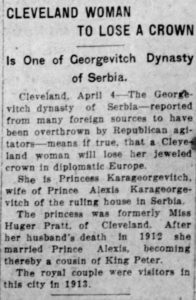 (Mention of Huger Pratt’s death in the April 4, 1919 edition of The Marion Star)

This article implies that Abbie never went through with the divorce and remained married to him until he died in 1912, which would also suggest that he did reveal himself eventually. Given how uncertain information about Pratt’s death is, however, this article cannot be presumed to be accurate. As we could not find any other confirmation of a death year of 1912, it is entirely possible that the newspaper had fallen victim to misinformation, like other publications before and after it. Until someone can locate an actual obituary or death record, it seems likely that Huger Pratt will remain an Olympic mystery.

Today on Oldest Olympians we were are going a little further back than usual to dig up our Olympic mystery. Our subject of the day is Julius Schaefer, about whom little is known. While this is the case for many participants from the 1904 St. Louis Games, we did uncover some additional clues that make this a mystery worth sharing.

All we know about Schaefer for certain is that he competed in two events at the 1904 Olympics. In the 25 mile race, he was among the six starters (out of ten total) who failed to complete the event. He had much more luck in the 5 mile competition, where he was one of only four people to finish a race that had begun with nine contestants. Unfortunately for Schaefer, he placed fourth and thus missed an Olympic medal. At the time, he was a member of the South Side Cycling Club of St. Louis.

Contemporary reports demonstrate that Schaefer continued racing through at least 1908, but give no indication of when he began his career or any other biographical hints, other than the fact that he was still considered youthful at that time. It is not until September 6-7, 1934 that we could locate another clue. On that date, obituaries appear for a Julius Schaefer, aged either 53 or 54, who committed suicide by gunshot on the 6th in St. Louis. By occupation, he owned a local bicycle shop.

(The obituary of a Julius Schaefer from the September 6, 1934 edition of the St. Louis Post-Dispatch)

Unfortunately, there are no other details that can help us connect this obituary to the Olympian, which is not surprising, as many events at the 1904 Games were considered to be of uncertain Olympic status and, in 1934, there would be no reason for an obituary to mention participation in that tournament. Aside from the bicycle store connection and his age, which would be appropriate for the Olympian, there is no strong evidence that this was the 1904 cyclist Julius Schaefer.

The mystery, however, takes one final odd twist. On July 17, 1902, a story was published about a man who attempted to commit suicide after an argument with his brother, Herman. Just as in 1934, it was noted that the love interest of the tobacco worker was “in a despondent mood” prior to his act of drinking poison. His name was Julius Schaefer. 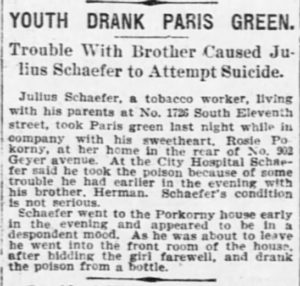 (A note of the attempted suicide of Julius Schaefer in the July 17, 1902 edition of The St. Louis Republic)

We could not uncover a connection between the 1902 Schaefer and the 1934 Schaefer, let alone one to the Olympian, so we can only speculate if any are one and the same. We did locate Herman Schaefer’s obituary, which lists his family members and indicates that the 1902 Julius was still alive at that time. It omits, however, one important name – that of Julius’ wife – which is the only family member name present in the 1934 obituaries (Maria). Thus, we are left with our mystery: is the bike shop-owning Julius Schaefer who died in 1934 the Olympian? And, if so, did he struggle with depression for over three decades before it finally claimed his life? For now, this is an Olympic mystery on which we can only speculate. 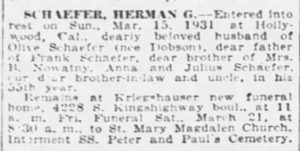 (Herman Schaefer’s obituary from the March 20, 1931 edition of the St. Louis Globe-Democrat)

Today Oldest Olympians is presenting the story of another Olympic medalist about whom we could find little of their post-athletic life: South African sprinter Daphne Hasenjäger, born July 2, 1929, who would have recently turned 90 if still alive. 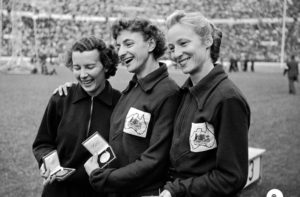 Hasenjäger began her career in the aftermath of World War II as Daphne Robb. Her first major international appearance came at the 1948 London Olympics, where she was eliminated in the semifinals of the 100 metres and placed sixth in the 200 metres. In 1949 she ran the 100 yards in 10.7 seconds, then a world record, but it was not recognized due to assistance from the wind. Robb’s achievements became more notable in the 1950s, as she won a bronze medal in the 220 yards event at the 1950 British Empire Games and then, after marrying a fellow athlete and becoming Daphne Hasenjäger, earned a silver medal in the 100 metres at the 1952 Helsinki Olympics.

After this, we have been unable to find much trace of her, let alone information on whether or not she is still alive. We know that a street in Windhoek, Namibia was named after her no later than 1997, but as this honor is not exclusive to deceased individuals, this fact does not tell us much. In this case, we have no language barrier, nor any real reason that we should not be able to find at least some information on her after her athletic career. The sheer death of material, we feel, is an Olympic Mystery of its own, one that we hope our readers will find relatively easy to solve.