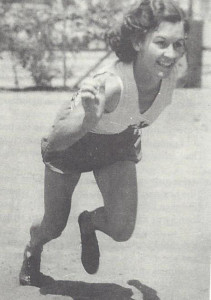 Evelyn Furtsch won a gold medal in the 1932 4×100 relay, running the second leg. She had not qualified for the 100 metres because both Elizabeth Wilde and Louise Stokes finished ahead of her at the Final Trials, but were not selected for the Olympics, so Furtsch, representing the Los Angeles Athletic Club, was perhaps fortunate to have won a place on the relay team for the Los Angeles Games. The only time she placed in an AAU championship was in 1931, when she finished second in the 100 yards. After the Olympics she attended Santa Ana College for two years, but there was no track team and her opportunities for training in that era were limited, so she ended her track career, competing in field hockey and basketball and then got married after her second year of college. She was elected to the Orange County Sports Hall of Fame in California in 1985 and in 1984, received the Ralph Clark Distinguished Citizen Award in Santa Ana.

2 thoughts on “Olympian Bio of the Day – Evelyn Furtsch”