Walter Walsh’s Olympic participation in 1948 seems like a footnote to a life of experiences known by few men. Born in New Jersey, Walsh graduated from Rutgers Law School and then in 1934 joined the FBI. A year later he was on the stakeout team in Chicago that apprehended Doc Barker, one of the most wanted criminals in the United States. Acting on a tip that same year, he also discovered the body of Chicago gangster Baby Face Nelson. Two years later he was involved in a shoot-out in Bangor, Maine with Al Brady, who was at the time Public Enemy #1 and who was killed during the shoot-out. In World War II he joined the Marine Corps and rose to the rank of Lieutenant-Colonel. He was commander of the Marine Corps’ marksmanship unit for several years and competed in the 1948 Olympics while in the Marines. When the FBI celebrated its 100th anniversary in 2007, Walsh was still around, by then 101-years-old, noting that he was older than the FBI, and he was the oldest living FBI agent. In March 2013 he surpassed Rudy Schrader to become the longest-lived Olympian of all-time. 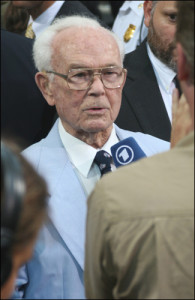 The oldest living Olympian becomes Swiss artist Hans Erni, who was born 21 February 1909, who entered in the Art Competitions in 1948 at London, the last time they were held formally. The oldest living athlete is Chinese track & field Olympian Guo Jie from 1936.