Several tweets and blog posts have commented that 15 June 2014 was the 100th anniversary of the unveiling of the Olympic Flag. This is not actually true, as we will note below, although it is the 100th anniversary of when the now familiar flag was approved by the IOC as its official symbol, but it had actually been designed several months earlier and displayed in April 1914 in Alexandria, Egypt.

The Olympic Flag has a plain white background with no border.  In the center is what is termed the Olympic Symbol, which consists of five interconnected rings.  They form two rows of three rings above, and two below.  The rings of the upper row are, from left to right, blue, black, and red.  The rings of the lower row are yellow and green.  The rings are thought to symbolize the five continents – Europe, Asia, Africa, Australia, and America.  The colors of the rings are thought to have been chosen because at least one of these colors can be found in the flag of every nation. Despite some commentaries I have seen, there is no designation of any of the colors to be assigned to any specific continent. 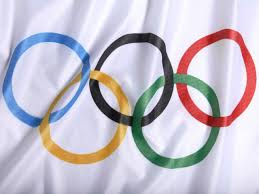 The origin of the flag’s design is in some dispute.  It was designed by Baron Pierre de Coubertin to honor and represent the 1914 Olympic Congress in Paris.  Some sources state that de Coubertin saw the rings at Delphi in 1913, but classics scholars believe this is highly unlikely and that they are of his own, modern invention. There is a picture of the rings at Delphi, but these were almost certainly added after the Olympic Flag had been unveiled. It is known that de Coubertin had written a letter in 1913 with his design for the five rings at the top of the letter.

The idea of a flag was raised by the IOC in 1910 and a special committee worked to plan it.  Several suggestions were made, notably by Theodore Cook (GBR) and Clarence von Rosen (SWE), but little progress was made until de Coubertin came up with his design.  He commented in the August 1913 edition of Revue Olympique, “These five rings represent the five parts of the world from this point on won over to Olympism and given to accepting fruitful rivalry.  Furthermore, the six colors [including the white background] thus combined reproduce the colors of all the nations, with no exception.” The flag was first flown at Chatsby Stadium in Alexandria, Egypt for the Pan-Egyptian Games on 5 April 1914.  It was presented to the International Olympic Committee (IOC) by de Coubertin at the Olympic Congress in 1914 at the Sorbonne in Paris, where it was officially approved on 15 June 1914.  The flag was also flown in 1915 at the San Francisco Exhibition and at the 1919 IOC Session in Lausanne, before it made its début at the Olympic Games in 1920 at Antwerp, Belgium.  The “primary” Olympic Flag was thus known as “the Antwerp flag,” and has been the main Olympic Flag flown at the stadium at all Olympic Games through 1984.  In 1984, Seoul presented a new Olympic Flag to the IOC, made of fine Korean silk, which was first flown at the 1988 Olympics.  A second “primary” Olympic Flag is used for the Olympic Winter Games, which was donated in 1952 by the host city of Oslo, Norway.

One thought on “Olympic Flag 100th Anniversary – Not Exactly”