Roberto C. Mieres, colloquially known as “Bitito”, was born in Mar de Plata, on 3 December 1924. He belonged to a wealthy family, and was active in many sports, including tennis, rugby, rowing and yachting. In 1948, he drove his first racing car, a Mercedes. 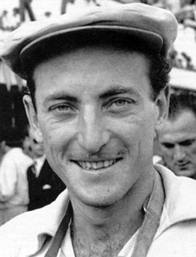 In 1950, after having won the Argentine sportscar championship, he was invited to join his fellow countrymen, Juan Manuel Fangio and Froilán González, for some races in Europe. Driving a Ferrari, he placed fourth in the Geneva GP, a non-championship race. After that, Mieres was absent from the European circuits for several years, until Gordini offered him a ride for the 1953 season. Mieres drove three races, placing sixth in the Italian GP. For the next season, he entered the first five races of the season as a privateer, racing his own Maserati. Following the death of the Argentine Maserati driver Onofre Marimón at the German GP, Mieres was invited to join the Maserati factory team. This move immediately proved successful, with Mieres scoring fourth places in both Switzerland and Spain, and eventually sharing eighth place in the championship.

He stayed with the Maserati team for 1955. During the season opener, in front of his home crowd in Buenos Aires, Mieres briefly lead the race, but eventually finished fifth . But Maserati was no match to the strong Mercedes-Benz cars, and Mieres again placed eighth in the championship. The Dutch GP at Zandvoort was his best race, placing fourth, but recording the fastest lap. After the season, Mieres went back to Argentina, not to appear in the European racing scene again, although he would make appearances in the Buenos Aires 1000 km sportscar race in 1957 and 1958.

Mieres switched his focus from racing to sailing, and this resulted in qualification for the Olympic Games of Rome, 1960. Together with Víctor Fragola, he entered the Star class. His final classification was 17th, two spots before Prince Bira, who had also raced a Maserati in the 1954 season. Mieres later settled in the Uruguayan city of Punta del Este, where he lived until his death.