Budapest has withdrawn as a potential host city for the 2024 Olympic Games, leaving only 2 remaining bid cities – Los Angeles and Paris. There were originally 5 bid cities presented to the IOC for 2024, but Roma, Italy and Hamburg, Germany also withdrew earlier, with Hamburg doing so after poor results in a referendum, and Roma’s mayor pulling the plug on the bid.

This follows on the heels of the bidding for the 2022 Olympic Winter Games, which finally were awarded to Beijing. There were originally 6 bid cities for those Winter Olympics, but for various reasons, Oslo, Stockholm, Kraków, and Lviv also all withdrew.

This certainly does not look good for the IOC and the anti-Olympic Movement is chortling today, claiming that they have won again and that no cities want the Olympic Games, mainly because of excessive costs. Certainly it is concerning that so many cities are withdrawing as potential hosts but, as always, let’s look at this in some context.
Below are the lists of the number of bids that have been submitted to host the Olympic Games and Olympic Winter Games since 1960.

We chose 1960 for a reason – that is the year that US television starting televising the Games. For many years, US television funded the Olympic Movement, and it still contributes a large portion of IOC funds. So in 1960 the whole financial picture changed and 1960 is thus a good place to start this analysis. 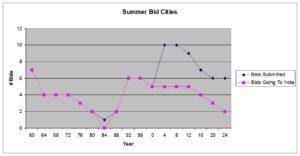 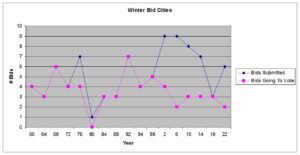 Looking at the Summer Bids, two trends are obvious. One is that there have never been more cities submitting bids than have done so in the 2004-2024 era. The other is that there are two distinct downward trends for number of cities finally going to the vote – first in 1976-84, and now in 2016-24, although it is not as bad now as it was then.

More cities bid now because in the 1980-90s, thanks to the magic of Peter Ueberroth and the astounding financial success of the 1984 Los Angeles Olympics, it appeared that cities could make a profit on the Olympics. Actually, they can, if run correctly, and depending on accounting, of course. Dick Pound and Juan Antonio Samaranch realized that Ueberroth’s methods to control costs and bring in revenues would work for the IOC as a whole and started the TOP Progamme in the early 1980s, which further guaranteed host cities money up front. Olympic Games looked to be a financial plus for cities.

Unfortunately, as Tom Wolfe said in “The Right Stuff,” a few cities then “screwed the pooch” for the others. Athens could not control costs and did not have the financial wherewithal of a Los Angeles or even an Atlanta or Sydney. Beijing cared little about how much money it spent – my favorite financial figure from Beijing is $350 million (US) – that’s how much the Opening Ceremony supposedly cost. And finally, Rio de Janeiro was a financial disaster, though not fully their fault, as when the bid was awarded in 2009, Brazil was a boom country, part of the BRIC economies, but that economy soon cratered.

However, in general, there’s not a big difference now in the number of bids that went to vote than there have been since 1960. There are simply less than there were in the boom period of 1992-2012. And remember, there were so many bids in that era, that the IOC established an Evaluation Commission that eliminated bids prior to the final vote. It may look like, above, that many cities dropped out in that era, but they did not – they were dropped by the IOC. The IOC Evaluation Commission eliminated the following number of cities from 2004-16: 2004 – 5; 2008 – 5; 2012 – 4; and 2016 – 3.

What about bidding for the Winter Games? From the charts and graph above, it’s harder to tell for the Winter Olympics as the chart bounces all over the place. But in general, the average number of final bids since 1960 has usually been between 3 to 5, with blips only in 1968 and 1992. Again, although there were more bids between 2002-14, many of these were eliminated by the IOC Evaluation Commission. The Evaluation Commission eliminated bids as follows in those years: 2002 – 5; 2006 – 7; 2010 – 5; and 2014 – 4.

So yes, this does not look good with bid cities dropping out. But it has happened before to the Olympic Movement and they responded and actually turned it around. Can they do it again? Are Peter Ueberroth and Dick Pound still available?