With the 2018 Olympic Winter Games now less than 10 months away, I have started looking at some stats related to the Winter Olympics. Since I often work with the US Olympic Committee at the Olympics, this has also entailed looking at @TeamUSA stats. One interesting stat is that the USA has won 96 gold medals at the Winter Olympics, and barring a complete reversal of recent performances, will go over 100 in PyeongChang.

I was also interested in how the USA stacks up on the overall medal list, and I noted that they are second, behind Norway in both gold medals and total medals won, but also that, over the last few Winter Olympics, they have moving up the list. The top four nations at the Olympic Games, in terms of medals won, are as follows:

I’m not going to look any further at Austria. It looks like it is close to the top 3 nations, only slightly behind Germany, but in fact, it is much further behind than the above stats reveal. That is because Germany only includes medals won as a combined Germany, and from 1968-88 both West Germany (FRG) and East Germany (GDR) competed and if you include those medals, Austria is far behind.

Over the last few Olympics, the USA has improved a great deal and seemed to be closing in on Norway in terms of medals won and golds won. I was curious if this trend continued, when the USA might overtake Norway, if they did at all, or perhaps Germany might also do so.

Germany would be ahead now if the country had not been divided. Counting Germany and the GDR, they would have 126 gold medals and 340 medals, and lead both lists. Counting Germany and West Germany, they would have 98 golds, and 269 medals, distancing Austria. If you count a combined German team, counting all German medals, they have 137 golds and 379 medals, far ahead in both categories. That is, however, somewhat of a specious argument as from 1968-88 such a United Germany would have had 6-8 competitors in many individual events, far more than usually allowed.

For future predictions, the important years to look at are 1992-2014, because in 1992 Germany was again a unified nation. In addition, in the 21st century, Norway has not led the medal list, either in golds, or total medals, at any Winter Olympics, except for golds in 2002. It would appear that both Germany and the United States are catching up.

So are Norway’s days at the top of the Winter Olympics medal table numbered? We looked at the average number of golds and medals won at each Winter Olympics since 1992 by Norway, Germany, and the USA. We then predicted what would happen at the next few Winter Olympics, if all three nations continued to win medals at the same rate they have since 1992.

That’s a pretty busy table but here is what the chart of these projected medal tables look like: 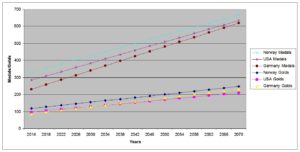 As you can see in this chart, Norway starts out ahead in medals and gold medals, and stays ahead through 2070, although Germany and the United States both close the gaps slightly.

So will the USA or Germany topple Norway from the top of the Winter Olympic medal table? Not in my lifetime, and probably not in this century, unless things change.

Now it may be that they will change. The trend has been to add more and more X-generation and X-Games sports, such as freestyle skiing and snowboarding, and the United States has excelled at these sports. Germany not so much, but Germany is dominant in sliding sports. Unfortunately they’ve run out of them since we have sports going down the mountain sitting (bobsled), lying prone (skeleton), and lying supine (luge). I’m not sure how else they can slide down the mountain, unless they come up with a standing sliding event – ice surfing?

The above also assumes that the number of events on the Winter Olympics Program will remain about the same. The IOC has tended to add more and more events, but there are not many more Winter Olympic sports to add, and it’s hard to predict how these numbers may change if the number of events increases. It will depend on which events are added, whether they favor traditional winter events, favoring Norway, or they add X-sports, favoring the United States, and less so, Germany.

So for the foreseeable future, unless the Winter Olympic Program drastically changes, I think Norway will continue to lead the all-time Winter Olympic medal table through the 21st century.