A little bit delayed, but today the Oldest Olympians blog is beginning the new series of entries that we promised a few weeks ago. We are going to begin looking into Olympians for whom we believe to have identified their date of death but, for whatever reason, we are unable to connect the information, such as obituary or public record, conclusively to the athlete. As the objective here is to not only share the “behind-the-scenes” of our research, but also help solve a few of these mysteries, we will be limiting the number of individuals that we cover in one post to something manageable in the hopes of not overwhelming our readers. In that vein, we are going to start with three cases to introduce the topic.

The Canadian lineup for the men’s coxed eights includes a man named Robert H. B. Christmas, born c. 1924, as a member of the team. His presence on the squad, which was eliminated in the semi-finals, is the only information we have about him, and researching his life has proven difficult due to the large number of irrelevant results that come up due to his surname being “Christmas”. The Rootsweb obituary index, however, lists an obituary for a “Robert Harry Bernard Christmas”, who died at the age of 76, in the Hamilton Spectator on January 21, 2000. While all the details line up, and thus this seems very likely to be the Olympian, we have not been able to procure a copy of the obituary for review to confirm this fact.

Unlike Christmas, we have plenty of information on Cuban gymnast Raimundo Rey, born July 29, 1925. In addition to his appearance at the 1948 London Olympics, where he was 14th with the Cuban team and had a best individual result of 77th in the pommelled horse, he won seven medals – three of which were gold – at the 1951 Pan American Games. He was instrumental in establishing the sport of gymnastics in Cuba, but eventually moved to the United States and settled in Florida. According to some public records, he died in 2013, but we have been unable to locate an obituary or any definite confirmation that he is deceased. 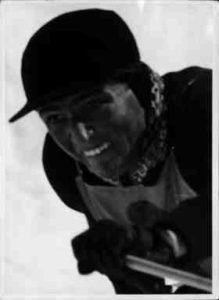 One of the most contentious potential sources for previously unknown information is Wikipedia. Information added there could be pure vandalism, but in other cases it could come from privileged sources, such as family members, and thus understandably be unavailable in other mediums. Thus it becomes very important to take a critical eye to any information from the world’s most prominent online encyclopedia. Austrian Nordic combined and cross-country skier Josl Gstrein is one of many cases where we have been unable to verify information on Wikipedia that we have no particular reason not to believe. Gstrein had a distinguished skiing career that culminated in an appearance at the 1948 St. Moritz Olympics, where he just missed a medal with the Austrian team in the 4×10 kilometres Nordic combined relay, finishing in fourth. He later had a career running a ski school. The German-language Wikipedia has a year of death of 1980 but, as we have been unable to locate any confirmation elsewhere, the accuracy of this information remains a mystery.

As we mentioned above, our aim is to not overwhelm with the number of athletes we engage in each blog, so we are going to stop here for today. For the next several weeks, however, we will be raising several cases per entry in the hopes of solving a few mysteries and sharing our research. If, however, all we accomplish is sharing and celebrating the legacies of some of these athletes, then we will consider these posts successful. We hope, therefore, that you will join us next week!