Today on Oldest Olympians, we are going back to looking at just one individual: Chai Hon Yam. Chai was the lone member of Singapore’s field hockey squad at the 1956 Melbourne Olympics with Chinese ancestry. Despite winning two of its three matches in the preliminary round, the nation failed to advance to the semifinals because it was in the same pool as India, the upcoming gold medalists. They then lost all three of their classification round matches and placed eighth overall.

Chai was prominent in the region not only on the basis of his domestic field hockey performances, but also due to his notable career in the aviation industry. Working for Malayan Airlines (later Malaysian Airlines, after the company split to have separate airlines for Malaysia and Singapore), his contributions to engineering and technical services were key in the firm’s expansion, and he was later made an honorary member of the Association of Asian Aerospace Professionals. 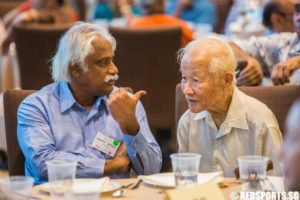 Due to his notability, we know that he was alive at least as recently as 2014, when he was photographed at a banquet honoring sports pioneers. Therefore, he is well within the range of where we would list someone as being alive. Recently, however, we came across the obituary of a man by the same name who died December 7, 2017 at the age of 90: 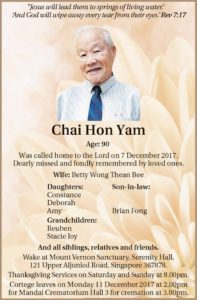 His age in the obituary would make him one year older than the Olympian, but we know that it is customary in certain cultures to begin one’s age count at one rather than zero. Moreover, his name is relatively uncommon and the picture in the obituary seems to resemble the Olympian from the 2014 banquet. The complication, however, is that there is no smoking gun, such as a birthdate or explicit mention of his field hockey or aviation careers, and all of our contact leads came up empty. Given that he was living recently, we would hate to mistakenly list him as deceased, as we have had cases in the past where a surprising amount of similar information about an individual turned out to be merely a coincidence. For the time being, we have elected to leave him on the list of living Olympians, but we are posting this blog as a major caveat that he may very likely be deceased.