Today on Oldest Olympians we are looking into the story of another Olympian who is certainly deceased, but for whom mystery nonetheless surrounds them: Joe Wheater, born October 6, 1918. 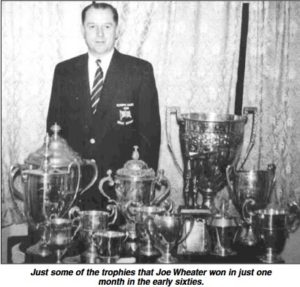 Wheater came into competitive sport shooting somewhat later in life but, when he arrived, he wasted no time in demonstrating his prowess as being among Great Britain’s best. Over the course of his career, he won over 60 English titles, appeared in three editions of the Olympic trap shooting competition (1956, 1960, and 1964), and set a world record in clay target shooting in 1956. While his best finish at the Games was sixth in 1960, he earned several medals in the sport at the European Championships over the years.

One would assume that a sportsman with such a distinguished record would be among the last candidates for being involved with an “Olympic mystery” but, as we have seen, mysteries can occur in unexpected places. In Wheater’s case, there are numerous websites that continue to list him among the living, and thus for many years we made the assumption that he was still alive. One website, however, intrigued us, as it explicitly listed Wheater as deceased:

We contacted the owner of the website, Keith Coyle, who informed us that Wheater had sold his shooting grounds in the late 1990s and then retired. While living abroad in 2009, Coyle was informed by friends that Wheater had died, but unfortunately could not locate any obituaries to confirm this fact. We passed this information on to the dedicated team of researchers at the OlyMADMen, but they were unable to come up with any records concerning his death. Earlier this year, one member did locate a probate record for a Joseph Wheater who died November 24, 2011 near Leeds, but unfortunately there was insufficient information to determine that this was the Olympian, and, moreover, it did not align with Coyle’s information.

Given all of this, we are left wondering: when did Joe Wheater die and how did such a notable sportsman manage to elude everyone’s attention when he did? Many sources still list him as being alive, or as having been alive more recently than 2009, which is not surprising given that one would assume that at least one obituary would have been published for him. Until we can locate additional information, Wheater will remain among our Olympic mysteries.