It has been about two months since we last featured a mystery about an Olympic medalist, but today we have another South African to discuss: cyclist Ray Robinson, born September 3, 1929, who would have recently turned 90 if still alive 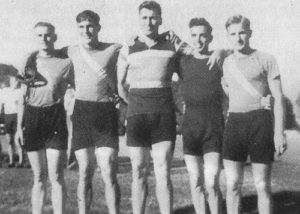 Robinson had a very successful run at the 1952 Helsinki Olympics, winning silver in the tandem sprint with Tommy Shardelow and bronze in the 1,000 metres time trial. He also placed fifth in the sprint. He and Shardelow competed again at the 1956 Melbourne Games, but were eliminated in the quarterfinals. He continued riding until 1960 but, unfortunately, due to his relatively common name (and the fact that results tend to get muddled with those of Sugar Ray Robinson), we have been unable to locate more about his career or later life.

Even though English is a common language in South Africa (certainly at the time of Robinson’s career), it is not particularly surprising to have a medal mystery from this country; in fact, we have covered several in the past. Considering the many racial tensions that existed during that era of national sport and its subsequent tarnished legacy, added to the commonality of his name, it is not surprising that there are few online resources available to explore his career. What does make him unique, however, is that he is arguably our most decorated Olympic mystery. We have covered the case of Belgian figure skater Micheline Lannoy, our only Olympic gold medal mystery, but Robinson is one of only two Olympic medal mysteries to have earned more than one medal, and the other, Austrian canoeist Herbert Wiedermann, won bronze twice.

This is why we have chosen to highlight Robinson in today’s blog as a crucial portion of Olympic history, because we suspect that the information must be out there, and that it is either inaccessible to us or we have simply missed it. On our last day at the Olympic Studies Center in Lausanne, we even attempted to scour some rare books on South African sports history for clues about his career and fate, but to no avail. Left with limited options we turn to you, our readers, in the hopes that someone will be able to solve this important Olympic mystery.