We here at Oldest Olympians have been doing much research as of late, and we have come up with a handful of new names for our Olympic Missing Links series. Thus, today we are once again looking at cases for whom we believed to have identified their date of death but, for whatever reason, we were unable to connect the information, such as obituary or public record, conclusively to the athlete. As always, we present them here not only in the hopes of solving some of these cases, but to continue our commitment to transparency in our research.

Humberto D. V. Aspitia, born December 12, 1928, represented Argentina in the 50 metres pistol event at the 1964 Tokyo Olympics, where he was 41st among 52 competitors. Three years later he competed at the same event at the Pan American Games, but just missed the podium by coming in fourth. This is all we know about him, and our only clue to his later life comes in the form of an obituary for a Humberto Del Valle Aspitia who died July 11, 2003. Unfortunately, without the obituary mentioning any additional details about his life, or even the age at which he died, we cannot confirm that this is the Olympian, even though it seems likely.

John Hinde, born October 3, 1928, was a member of two of Great Britain’s coxed eights squads. In 1952 in Helsinki, he just missed the podium in fourth, while in 1956 in Melbourne Britain was eliminated in the round one repêchage. He had more success at the 1951 World Championships, however, where he won a gold medal in the eights. We would have assumed that, given the stature of rowing in England, his death would have merited a noticeable obituary. Unfortunately, all we have been able to locate is a notice of a death for a man with his initials and age, but there are no details to connect him conclusively to the Olympian. 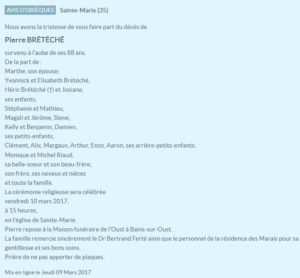 (An obituary for Pierre Brétéché)

Pierre Brétéché, born July 2, 1928, represented France in the 5.5 metres class competition at the 1968 Mexico City Games, where he finished 10th out of 14 nations. Like many Olympic sailors, this is all we know about him and, like our other entries today, our only clue to his fate comes from a brief obituary we found online. It lists a Pierre Brétéché as having died in March 2017 at the age of 88, which would be correct for the athlete. Unfortunately, without more information, we cannot be sure that this is the Olympian. 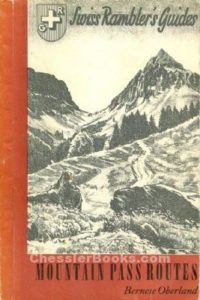 (Cover of a skiing guide to which Otto Beyeler contributed)

Otto Beyeler, born July 21, 1926, was a relatively well-known figure on Switzerland’s ski scene, but represented his country only once at the Olympics. At the 1952 Oslo Games, he came in 15th out of 36 competitors in the 50 km event, the highest placement for the four Swiss participants. As with the rest of today’s missing links, we came across an obituary with too few details to indicate that its subject was the Olympian. It simply lists an Otto Beyeler, born 1926, as having died on January 30, 2016 in Rothrist, with nothing that could identify him for certain as the Olympian.

We have a few more names to cover but, in order to prevent this post from going on too long, we have decided to discuss the rest next week. In the meantime, we wanted to end on a more positive note: an anonymous user on Wikipedia was able to point us to a post from a relative of Chilean basketball player Eduardo Cordero, featured previously on Olympic Missing Links, confirming that Cordero died in September 1991. We want to convey our thanks to that user for helping us solve another Olympic mystery!