Simply making an Olympic team is often considered among the ultimate athletic accomplishments. It signifies that you have reached the highest level of competition in your sport. But in some cases athletes have competed at both the Summer and Winter Olympics, which has to be an even rarer feat. How common is it?

Actually, it has happened 128 times. And it has been done in a dizzying array of 47 different sport combinations. By far the most common both season Olympians are in athletics (track & field) and bobsledding, with 40 Olympians competing in this combination.

In 1980 at Lake Placid Willie Davenport competed in bobsledding for the United States. A four-time Olympian (1964-76), and gold medalist in the high hurdles in 1968, Davenport was recruited to bobsledding for his leg strength and drive, to help with the push starts. It began a trend of top track & field athletes competing in bobsled. The best known was likely East German 1988 decathlon silver medalist Torsten Voss, who pushed a bob at Nagano in 1998 for Germany.

From the United States, another famous athlete who competed in Olympic bobsledding (1992) was NFL running back Herschel Walker. Walker was a top track & field in high school but never competed in the Summer Olympics.

Multiple athletics stars have been recruited since, with the United States possibly including Lolo Jones and Lauryn Williams on their women’s bobsled squads for Sochi.

Prior to this trend of athletics/bobsledding doubles, the most common both season sport double was cycling and speedskating, and it is still the second most common with 16 athletes having accomplished it. This combination occurred because the muscles and the training for both sports is similar, and athletes would often use the “other” sport for off-season training.

Two cyclists / speedskaters have won Olympic medals in both sports – Canadian Clara Hughes and German Christa Rothenburger-Luding. No athlete / bobsledder has yet pulled off the Winter / Summer medal double. This has been done by other athletes – notably Eddie Eagan, an American who won a gold medal in 1920 boxing and 1932 bobsledding, the only Olympian to have won gold medals at both the Winter and Summer Olympics. Norwegian Jacob Tullin Thams won Olympic medals in both ski jumping and sailing – there’s a combination for you.

It was even rarer for athletes to compete in the Summer and Winter Olympics in the same year, although that can no longer occur. This was done 41 times. Most notable was the accomplishment of Japanese female cyclist / speedskater Seiko Hashimoto who competed at the Winter and Summer Olympics in 1988 and 1992. The only other Olympian to have done this twice was the Swiss Charles Stoffel, who, in the days of more gentlemanly bobsled competition, competed in equestrian and bobsledding in 1924 and 1928.

Here are the sport doubles for both season Olympians, in order of frequency:

How many will add to this list in Sochi? Certainly there will be a few athlete / bobsledders. Anybody else?

(Note: the author has a personal connection here – see the photos below of the cyclist / speedskater (guy on the left in the cycling picture). That guy went to the US Olympic Trials in cycling and speedskating in 1948, but did not make either Olympic team. That guy, however, was an Olympian of a Dad. And that folks, for your information, is how I first became interested in the Olympic Games.) 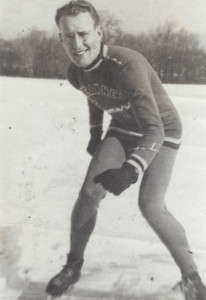 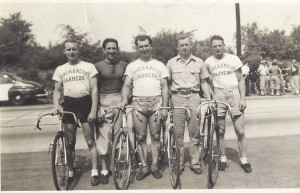 (Note: tomorrow we will start providing factsheets for the 15 Winter Olympic sports to be held in Sochi. Stay tuned.)