But “normal” hill and “large” hill are not fixed definitions. The hills have varied significantly over the years and the hills have continued to get larger over time. The design of a ski jumping hill is complex with numerous tables and charts defining the mathematical analysis available in multiple sources.

Ski jumping hills are often defined by what is known as the K-point (for K/critical, or construction, point). Currently, a normal hill has a K-point of about 90 metres, while a large hill K-point is usually about 120 metres. But as you can see below, the last two Winter Olympics, and Sochi, have had slightly larger hills, at 95 and 125 metres, respectively.

The K-point defines the average point on the landing hill where the jumpers are expected to land, for maximum safety. It can actually be defined as the inflection point where the landing hill curvature changes from convex to concave.

There are also larger hills used, but not at the Olympics. These are termed ski flying hills, in which the K-point is at 180-185 metres, usually, although the largest hill is at Vikersund, Norway, with a K-point of 195 metres. Ski flyers often jump over 200 metres, with the current world best 246.5 metres (809 feet), set by Norwegian Johan Evensen on the Vikersund hill in February 2011. 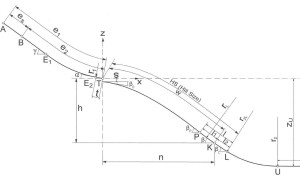 There are occasions in ski jumping where the jumpers will start “out-jumping the hill.” This is when, because of ideal conditions of wind, snow, or ice, the jumpers start landing well-below the K-point, and especially below the L-point. If that happens, it can be dangerous for the jumpers because they are not coming down in the landing area, and the officials may stop the competition, and re-start it with a lower start on the jumping hill in-run.

The Fédération Internationale de Ski (FIS) uses Hill Size to define which events must be held at the Olympics and World Championships. “OWG [Olympic Winter Games] and WSC [World Ski Championships] jumping competitions shall be held on hills of two different sizes. A World or Olympic champion will be selected for each hill size. The smaller hill should have a Hill Size (HS) of at least 100 [m]. The difference between the hill sizes must be at least 25 m.” (see http://www.fis-ski.com/inside-fis/document-library/ski-jumping/, under link Ski Jumping, and then International Competition Rules, p. 66)

Below are the measurements of all the Olympic ski jumping hills since 1924:

One thing to note is that the hills for Torino (2006), Vancouver (2010), and Sochi (2014) are exactly the same size, both in terms of K-point and Hill Size. The other thing of interest is that until 2006, both the normal hill and large hill tended to get bigger at each Olympics.

Finally, note that the normal hill used at the 2002-10 Winter Olympics, at a hill size of 106.0 m, is approaching the maximum for a normal hill (109.0 m), as defined by FIS regulations. The large hills, however, remain well below ski flying specifications and could theoretically be made larger at future Olympics.