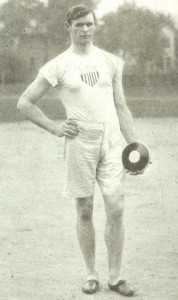 The Irish-born Martin Sheridan was the greatest all-round athlete of his time and thru 2014, his total of 9 Olympic medals has been bettered by only 11 Americans, and only by Carl Lewis and Ray Ewry in track & field. In addition to winning the discus at the 1904, 1906 and 1908 Olympic Games, Sheridan won the shot in 1906 and the Greek-style discus in 1908.  To these five gold medals he added three silver medals in 1906 in the stone throw and the standing jumps and a bronze medal in the standing long jump in 1908.

Inspired by his older brother, Richard, who won the AAU discus in 1901 and 1902, Martin himself won the title four times. He also won the AAU shot in 1904 and three times was the AAU All-Around champion (1905, 1907, 1909), setting a world record each time. Further proof of his versatility came at the 1908 Olympics when he placed ninth in the triple jump. The discus was undoubtedly his best event; in addition to his three Olympic titles and four AAU championships, he improved the world best in the discus 15 times between 1902 and 1909. Sheridan almost certainly missed another gold medal when he was forced to withdraw from the 1906 pentathlon due to injury.

Apart from his prowess as a competitor, Martin Sheridan has passed into Olympic lore with his remark to the press at the 1908 Olympics, where he was quoted as saying, “This flag dips to no earthly King!” after the Michigan weightman, Ralph Rose, refused to lower the American flag as he passed the Royal Box at the opening ceremony.

Like many of the great Irish-American athletes of the time, Sheridan was employed by the New York Police Department and was the personal bodyguard of the New York governor whenever he visited the city. Sheridan, who had come to America in 1897, retired from active competition in 1911 and died of pneumonia at the early age of 37, during the influenza pandemic of that year. At his death, seven years after he retired from athletics, no less than Jim Thorpe proclaimed that “Sheridan was the greatest athlete in the world.  He could do things I never could.”

On a personal note, each of us who write on this blog have our own favorites. The author (Mallon) of this post confesses that Martin Sheridan is his favorite Olympic athlete, so much that he sleeps next to him every nite. See the picture below – the Chocolate Lab is Martin Sheridan “Marty” Mallon, while the Westie is Barney Rubble Mallon. 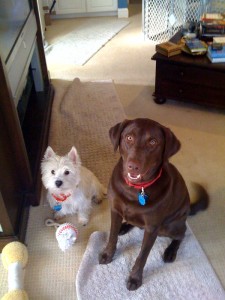