Philip John Baker was born in London on 1 November 1889, one of seven children of Canadian-born parents. He was raised in a Quaker home. His parents moved to England when his father, Joseph Allen Baker, was asked to establish a British branch of his father’s engineering business. In London, Joseph Baker became a member of the London County Council and later served in the House of Commons on the Liberal ticket, beginning in 1905. Thus, his upbringing gave him exposure to both politics and peaceful ways.

Philip Baker attended the Bootham School in York, after which he spent several years at a Quaker school in Philadelphia, Haverford College. He returned to England to earn his degrees from King’s College, Cambridge, earning honors in history (1910) and economics (1912). He received an M.A. with honors from Cambridge in 1913.

Baker eventually ran for Great Britain at the 1912 and 1920 Olympic Games. At Stockholm, he failed to survive the first round of the 800 metres. In the 1,500 metres, he qualified for the final, but sacrificed his own chances to pace his teammate, Arnold Jackson. Jackson won the gold medal, and Baker finished sixth. At Antwerp in 1920, Baker again ran in the 800 metres. He qualified for the semi-finals, but did not start in that round. In the 1,500 metres, he ran well, but was narrowly beaten by his teammate, Albert Hill, and earned a silver medal. 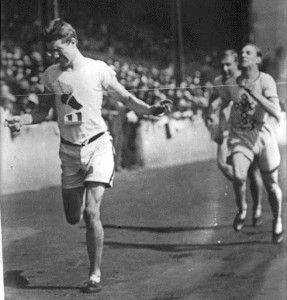 Baker’s fame came from his career after sports. As a Quaker pacifist, he rejected combat service in World War I, but commanded the Friends’ Ambulance Corps, serving at the front in France, and earning decorations for valor. He was later an adjutant in a British ambulance unit in Italy, and earned the British Silver Medal for Military Valor, and the Italian War Cross. In 1915, Philip Baker married Irene Noel, and would eventually take her name, being known as Philip Noel-Baker from the late thirties onward. They eventually had one child, Francis, a son born in 1920.

After the war, Noel-Baker was an assistant to Robert Cecil at the Paris Peace Conference and he helped draft the Covenant of the League of Nations. He was later named chief assistant to the secretary-general of the League, Eric Drummond, until 1922. During this time, he became associated with Fridtjof Nansen, the Norwegian explorer and humanitarian, who became known for his work on behalf of war refugees.

In 1924, Noel-Baker became Sir Ernest Cassell Professor of international relations at the University of London. He was elected to Parliament from Coventry in 1929, serving two years. In 1926 he wrote two books, The League of Nations at Work, and Disarmament, which earned him a reputation as an expert on disarmament. He was later (1932) appointed the parliamentary private secretary to Arthur Henderson, chairman of the World Disarmament Conference convened in Geneva in 1932. He was re-elected to Parliament in 1936 and held a seat representing Derby until 1970.

During World War II, Noel-Baker served as official spokesman for the War Ministry in the House of Commons. In 1945, when the Labour Party returned to power, he was made minister of state, a non-cabinet position under the foreign secretary. In that capacity, he headed the British delegation to the United Nations Preparatory Commission, and later served on the subcommittee that drew up the preliminary agenda for the United Nations General Assembly. He served as Secretary of State for Air from 1946-1947, and Secretary of State for Commonwealth Relations from 1947-1950.

Noel-Baker was a forceful advocate of arms control, and later served on the U.N. Economic and Social Council. His final book was published in 1958, The Arms Race: A Programme for World Disarmament. It was a comprehensive analysis of the history of disarmament with practical suggestions for the future course of the policy, and in 1960 was awarded the Albert Schweitzer Book Prize.

In 1959, for his work with the League of Nations, the United Nations, his lifetime commitment to peace, his work on behalf of war refugees, and his vast knowledge of disarmament, Philip John Noel-Baker was awarded the Nobel Prize for Peace. During his Nobel Prize lecture, he spoke of the threat posed by nuclear weapons and the arms race. He declared that the solution lay, not in partial measures, but in a comprehensive and complete program of disarmament under the United Nations. “Disarmament is … for every nation,” he stated, “the safest and most practicable system of defense.”

Noel-Baker retired from the House of Commons at age 80, declaring, “While I have the health and strength, I shall give all my time to the work of breaking the dogmatic sleep of those who allow the nuclear, chemical, biological, and conventional arms race to go on.” In 1977, Philip John Noel-Baker was made a life peer as Baron Noel-Baker of Derby. He died in London on 9 October 1982.

One thought on “Olympic Bio of the Day – Philip Noel-Baker”