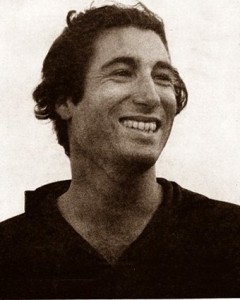 Fon de Portago was born in London, on 11 October 1928, to a wealthy aristocratic father and an Irish nurse. While his father engaged in the Spanish Civil War, Alfonso grew up in the French city of Biarritz. Playboy Alfonso de Portago excelled in many sports. Besides being a good swimmer, polo player and fencer, he was a very good steeplechaser (on horse), winning the French title and participating in the Grand National at Aintree. He achieved his biggest successes, however, in auto racing.

He got interested in the sport through his American friend Edmond Nelson, who he had met as an elevator operator in the New York Plaza Hotel. His first race was the Carrera Panamericana of 1953, which he entered together with Luigi Chinetti (ITA) in a Ferrari 375. They did not complete the race, but it was the start of de Portago’s racing career. The following year, he took part in several sports car races, including the 12 hours of Sebring, and the 24 hours of Le Mans. His success in sports car races, driving Ferraris, earned him the attention of the Ferrari team, and he was signed for the team for the 1956 Formula 1 season.

Before his first race in 1956 (the 12 hours of Sebring), De Portago engaged in a different sport, although it also involved steering. Together with three of his cousins – Vicente Sartorius, Gonzalo Taboada and Luis Muñoz – he formed the very first Spanish Olympic bobsleigh team to take part in the Winter Olympics held in Cortina d’Ampezzo. With the Sartorius, the Marquis de Mariño as his brakeman, De Portago steered the two-man bob to a fourth place finish, just 0.16 seconds from the bronze, and clocked the second-best time in the third run. The four-man bobsleigh ended up in ninth position. 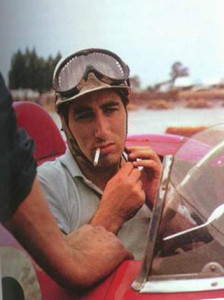 De Portago drove his first Formula 1 World Championship race at the French GP, and scored his first points in the next race at Silverstone, although it was Peter Collins (GBR) who took over de Portago’s car halfway through the race and drove it to a second place-finish. He failed to finish his other Grand Prix races that season, but scored a few victories in minor races.

He again scored points in the first race of the 1957 season, although he had to share them again, this time with Froilán González (ARG). A week before the Monaco GP, Alfonso de Portago entered the Mille Miglia, with his friend Nelson, in a Ferrari 335S. At a straightaway near the town of Giudizzolo, one of their tires blew, and their car swerved into the audience, killing at least 10 spectators, injuring many more, and killing de Portago and Nelson. This accident also meant the end of the Mille Miglia race.

Portago was also known for his winning ways with women, first marrying model Carroll McDaniel. They separated and he began an affair with another model, Dorian Leigh, sister of the first super-model Suzy Parker. At the time of his death, however, he was having another affair with Linda Christian, the ex-wife of actor Tyrone Power. On the day of his final race, at Mille Miglia, she ran out to kiss him prior to the race, which was captured by many of the paparazzi present, and which became known as “The Kiss of Death.”

As each of us has done the bio of our favorite Olympians, this bio is the special favorite of Jeroen Heijmans, our webmaster and Dutch Olympic expert.