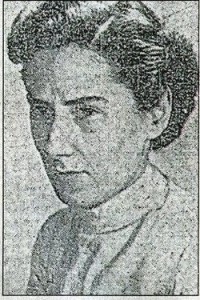 Dorothy Dermody, the daughter of a ship’s captain, spent her youth traveling aboard her father’s vessels. In order to circumvent rules that permitted the captain only one female companion, her father would cut her hair short and dress her as a young boy so that both mother and daughter could accompany him on his journeys. While sailing she was referred to as “Tommy”, a name that she retained in her athletic endeavors. She played lacrosse and squash at the national level, but was most accomplished in the fields of diving and fencing. She captured Irish championships in both sports, but it was for her skills in the former that she was offered the chance to compete at the 1948 Summer Olympics. When the time came, however, she requested to be entered into the fencing tournament instead. Her wish was granted, but she failed to advance beyond the opening round of the individual foil after losing all of her bouts.

Even outside of active competition, Dermody’s life revolved around athletics and she served as a teacher of physical education in several different capacities, most notably at Alexandra College from 1943 through 1958. She also took her love of sport public, heading campaigns to get playgrounds in every school in the country and to get children more involved in aquatic activities. At her death in 2012 she was Ireland’s oldest living Olympic competitor and the longest-lived Olympic fencer of all time.