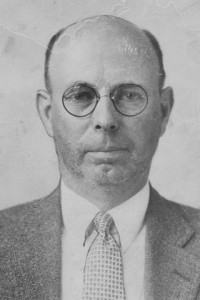 James Snook, twice a shooting gold medalist at the 1920 Olympics, made national headlines in 1929 and 1930, but not for anything to do with his shooting ability. Snook was a 1908 graduate of the Ohio State Veterinary School and in 1920 was a professor of veterinary medicine at Ohio State. In June 1929 he was practicing at the Ohio State rifle range when he was arrested and accused of the murder of Theora K. Hix, a medical student at Ohio State. 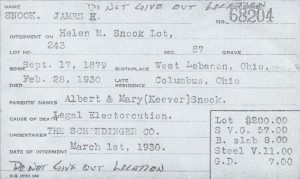 It turned out that Snook and Hix had posed as man and wife for three years, sharing an apartment near the school’s campus. On 13 June 1929, Snook claimed that Hix asked him to divorce his wife and marry her, threatening to kill his wife and child if she was refused. Snook confessed to then beating Hix several times with a hammer before severing her jugular vein with a pocket-knife to “relieve her suffering.” On 14 August 1929 a jury deliberated only 28 minutes before finding Snook guilty of first degree murder. A week later he was sentenced to be put to death, and at 7:10 p.m. on 28 February 1930, he died in the electric chair at the Ohio State Penitentiary.