This week the film “Foxcatcher” will be released in the United States and already the word is that it may figure prominently in the nominations for the 2015 Academy Awards. The story surrounding the death of US Olympic wrestling champion Dave Schultz at the hands of paranoid-schizophrenic millionaire coach John du Pont has already gained critical plaudits especially for the performance of Steve Carrell as Du Pont.

There is a long history based on films based on the Olympic Games, or featuring Olympians, that goes way back into the mists of time. A few are regarded as classics of the silver screen; others are barely remembered at all. Let’s take a look at a selection of some of the more memorable movies based around the Olympic Games. These don’t include appearances by Olympians in acting roles in films without the Games as a central subject or documentaries. Those will be subjects of further posts in the near future.

The Ancient Olympics
Asterix at the Olympics (2008)
Live action version of the famous French cartoon book starring Gérard Depardieu which was released to coincide with the Beijing Olympics. Partly a sly parody of real life, much of the plot revolves around the use of a magic potion that is banned for the Olympic competitions.
It was badly received by critics and public alike. 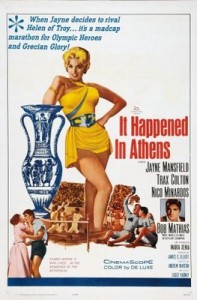 Based extremely loosely around the events of the inaugural Olympic marathon, Jayne Mansfield plays an actress who announces that she will marry the winner of the race whilst safe in the knowledge that her lover, an army officer, is the clear favourite. The natural running talent of a young shepherd called Spyridon Louis complicates the matter. The film was a flop when it came out and did irreparable damage to the careers of the lead actors. It featured a cameo from two time decathlon champion Bob Mathias.

1912 Stockholm
Jim Thorpe All-American (1951)
Burt Lancaster stars in the title role as the Native American who, apart from being the greatest all-round athlete on the planet, played professional American football and baseball. Thorpe himself appears in a cameo role as a coach. The film covers his exploits in Stockholm but also the triumphs and tragedies in his life and sporting career from high school to the year of the movie’s release.
It was a box office success at the time of its release.

Probably the benchmark in Olympic movies, the movie tells the tale of British sprinters Eric Liddell and Harold Abrahams. Liddell was the 400 metre champion in Paris before becoming a Christian missionary in China whilst the story of Abrahams, the 100 metre champion at the same Games, is set across a background of anti-Semitism and the British class system. A winner of 3 Oscars including best picture, it is also memorable for the score by Greek composer Vangelis.

1936 Berlin
Race (2016)
This is the one film in this list that has yet to be released. Filming began on this telling of the Jesse Owens story earlier this year. Starring Canadian actor Stephan James as Owens with Jeremy Irons as future IOC President Avery Brundage, the film is due for release in April 2016.

Berlin 1936 (2009)
“Berlin 1936” takes the story of Gretel Bergman and Dora Ratjen at the Berlin Olympics as a starting point even if most of the story bares little relation to the true events of 1936. In the film Marie Ketteler, a fictionalized version of Ratjen, is a man used by the Nazis to challenge Bergman, the Jewish athlete, for a place on the German team in the high jump. In real life, whether the authorities knew that Ratjen had an intersex condition is still a matter for conjecture.
The film was a modest success in financial terms. 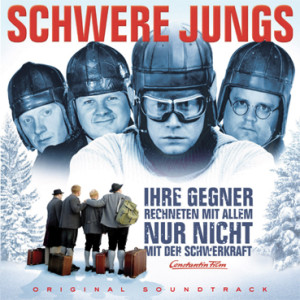 A low budget film based, if very loosely, on the story of the heavyweight German bobsleigh crew that won two gold medals at the Oslo Olympics.

1956 Melbourne
Geordie (1955)
A gentle British romantic comedy about a skinny young Scots boy who, with a help of a Charles Atlas type bodybuilding course, turns himself into a champion hammer thrower. He’s unable to perform well until he wears his father’s kilt in competition. This trick turns him from an also ran into the Olympic champion.

Szabadság, Szerelem (Children of Glory) (2006)
Using fictional lead characters and including a romantic subplot, the film weaves in the Soviet Union’s invasion of Hungary in 1956 with the Hungarian water polo’s Olympic campaign and, in particular, “The Blood in the Water Match” between Hungary and the USSR in Melbourne.

You can just imagine the conversation that led to the making of this film.
“O.K. Whatcha got?”
“Well, it’s a romantic comedy based on the accommodation shortage at the Tokyo Olympics”
“Yeah…”
“And the romantic lead is a race walker”
“This isn’t promising”
“But we got Cary Grant”
“Better”
“And there’s a cameo from the guy who plays Sulu in Star Trek”
“What’s Star Trek?”
“Ah well, it hasn’t been made yet but, trust me, it’s going to be big”
“That settles it, go ahead and make the film”
The story concerns a secretary at the British Embassy who lets out half her apartment to a British businessman, played by Grant, who sublets to the American walker. The rest of the film revolves around Grant’s attempt to get the pair together romantically.

1968 Grenoble
Downhill Racer 1969
Robert Redford stars as an egotistic American skier who clashes with team mates and official alike.
Of course he gets things together to win the Olympic title.

1972 Munich
Prefontaine (1997)
Without Limits (1998)
Two biopics of American distance runner Steve Prefontaine were released within a year of each other. Both portray Prefontaine as a maverick, headstrong but naturally gifted runner though they are told from different viewpoints. “Prefontaine” was told through the eyes of assistant coach Bill Dellinger whilst “Without Limits” has legendary coach Bill Bowerman as the focus of the film.
“Without Limits” was generally the better reviewed of the pair though both were major box office flops.

Munich (2005)
Stephen Spielberg directed and produced this film which dealt with the aftermath of the murder of members of the Israeli team in 1972. It traces the attempts of a group of Israeli agents to track down and assassinate members of the Black September terrorist group responsible for the massacre.
Although nominated for five Academy Awards, it failed to win in any category.

This is a retelling of the story of the unlikely victory of the US ice hockey team at the Lake Placid Olympics with Kurt Russell in the lead role of coach Herb Brooks. It’s basically another mismatched band of individuals fashioned into a team by an inspirational coach story but, in this case, done with more than usual style and attention to detail. It made $64,000,000 at the box office which was more than twice the production costs.

A heavily fictionalized version of the story of the 1988 Jamaican bobsleigh team starring Canadian comedian John Candy as a coach very loosely based on US champion Howard Siler. Played heavily for comedy, it became a smash hit and the most successful in box office terms of any film on this list.
The profits from the film now approach $200,000,000.

1988 Seoul
Jappeloup (2013)
This is a French film which traces the story of Pierre Durand, the lawyer who gave up his career to aim for Olympic glory, and his partnership with the horse Jappeloup which took him to the Olympic Games of 1984 and 1988.
It traces his disappointments in Los Angeles and gold medal success in Seoul.
Amongst the cast are the well-known French actor Daniel Auteuil and Canada’s Donald Sutherland.
The film was a critical and commercial success in France.

1992 Albertville
The Cutting Edge 1992
A romantic comedy about a rich and spoilt female skater forced to team up with an ice hockey player in their quest for Olympic glory. A moderate success in cinemas, it gained a new round of popularity when shown on TV and spawned 3 sequels.

1998 Nagano
Take Off (2009)
Yet another film to be based on a true story but which includes plot lines which are completely fictitious.
The story of the founding of a South Korean ski jumping team to compete at the Nagano Olympics soared to success in Korea although it made little progress outside its own country.

2004 Athens
Forever the Moment (2008)
Probably the only major film to centre on women’s handball, the film traces the Korean team on the way to the final of the 2004 Athens Olympics. A relatively formulaic adaptation of a familiar theme of a team of individuals bonding together under an inspirational coach, it was a big success in Korea