A few months ago we looked at Olympic costs and how they related to both the number of athletes at the Olympics and the number of events contested, correcting all the figures against inflation. The post can be seen here – https://olympstats.com/2017/06/19/olympic-costs-rio-2016-and-future-projections/.

In that post we briefly touched on venue construction being affected by the number of events but did not analyze it deeply. Venue construction has been mentioned a lot in the recent awarding of the Games to Paris (2024) and Los Angeles (2028), in which Paris noted it had only to build “a few venues” including the Olympic Village and a media centre, while Los Angeles promised it did not need to build a single venue, a fact I look at somewhat dubiously.

When Peter Ueberroth was named head of the Los Angeles Organizing Committee for the 1984 Olympics, he famously later noted that his first project was to go and read all the previous Official Reports, to get some handle on Olympic Costs and what affects them. He did this at the Helms Foundation Library, which no longer exists, but has been subsumed within the LA84 Foundation Library in Los Angeles, a direct offspring of the 1984 Los Angeles Olympics.

Ueberroth noted that, to him, the most important and biggest cost faced by organizing committees (OCOGs) was the need to build venues and he decided he would host the 1984 Olympics by building as few of them as possible. He was helped by the fact that Los Angeles has and had myriad athletic facilities that he was able to use. He did end up having to build a velodrome, a swim stadium, and shooting range, but was able to get the velodrome and swim stadium paid for by sponsors – 7-Eleven and McDonalds, respectively.

So it appears that building venues and stadia is important in terms of the costs of the Olympics, but the question is how important is it, and can we estimate final Olympic costs based on how many venues the OCOG have to build? And is there a way to determine these figures?

Turns out, our Olympic stat group, the OlyMADMen, has compiled information on the venues of all the Olympics, in addition all the other facts our database contains. The venues can be found at our main site – www.olympedia.org – which for now is a private site, although we can provide access. Here is one of those pages of venues: 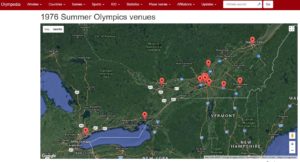 Further, we have detailed information on each venue, including, in most cases, the dates on which they were constructed. So we have a fairly good estimate of how any venues were constructed for each Olympics. To make this estimate, we made the assumption that any venue built within four years of the Olympics at which it served as a venue was likely constructed for that Olympics.

And what did we find? Here is the table of venue construction since the 1960 Roma Olympics, listing the percentage of all venues that were constructed specifically for each Olympic Games:

That doesn’t tell us much, although Los Angeles and Atlanta did not build many venues, and notably, Moscow in 1980 especially did not.

In our last post on Olympic costs, we looked carefully at how those costs were related to the number of athletes and the number of events. Venues are directly related to events, although you might not think so. But when you add new events, you may need to build new venues. Think of whitewater canoeing, which requires a completely new, fairly expensive venue for only a few events added onto the canoeing program. Or BMX cycling and mountain biking, which each require new venues for the cycling program, although the mountain bike venue is relatively construction free.

A couple of Games are obvious outliers here. Mainly Tokyo 1964 and Beijing 2008 are by far the most expensive Olympic Games ever (talking only Summer Olympics), which we knew. Further, omitting those 2 outliers, the modern era of costs and construction seems to begin in 1972, so we looked at venue construction vs cost/athlete since 1972, and omitted the absurdly expensive Beijing Olympics. Here is what that comparative table looks like, ranked in ascending order of venue construction percentage (VCP):

Is there anything we can make of this table, which seems to jump around quite a bit? Here is what the chart looks like for this table: 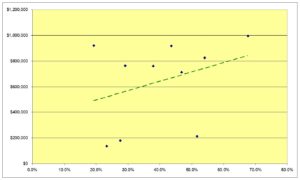 The dots on the chart are the data points, comparing costs against VCP, while the straight line is the best fit denoting the Pearson correlation coefficient (PCC). The PCC for this comparison is 0.3671. For those not familiar with PCC it analyzes if two sets of data are correlated together, i.e., if one moves up, does the other move up, and vice-versa. The PCC can range from 1 to -1. A PCC of 1 indicates a perfect correlation between two data sets, which rarely exists, while a a PCC of -1 is a perfect negative correlation, meaning if one set of data moves up, the other always moves down. A PCC of 0 equals no significant correlation in either direction.

So what does a PCC of 0.3671 mean? Unfortunately, there is no hard answer to that and it is open to interpretation. It is a positive number, meaning there is some correlation. But it is not very close to 1 so it is, at best, only a fair correlation between Olympic costs per athlete and VCP. Checking the PCC for its statistical significance, one finds it is weak, with a p-value between 0.15 and 0.10.

So this analysis somewhat supports Peter Ueberroth’s original contention, although not strongly. The number of athletes and number of events may still be a better predictor of overall Olympic costs, although venue construction certainly figures into the equation, at least to a degree, and it is directly related to the number of events.