It is a busy week here at Oldest Olympians, but we did not want to miss out on a quick blog post, so we decided to go a little outside of our usual field to bring you a rather unusual case. We always try to keep an eye on upcoming oldest Olympians, and in this instance something odd caught our attention. Our database indicated that Matthew Robert Best, a non-starter with the New Zealand field hockey team at the 1964 Tokyo Olympics had recently turned 80… on February 29, 2019. As February 29, 2019 does not exist, and therefore neither does February 29, 1939, we figured that this must be a simple error and followed up with the Official Report… which also listed his date of birth as February 29, 1939. 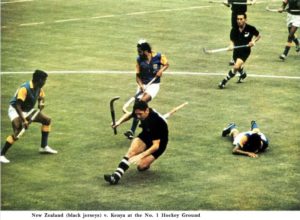 (The 1964 New Zealand field hockey team in a match against Kenya, as pictured in the Official Report).

So too do the official entry lists for the Games list him with that date of birth, which leaves us with the question of what his actual birthday is. We did some searching, but unfortunately his name is so common that we were unable to find any information on him at all. Thus, while this is somewhat outside of our normal purview, we felt it to be a quirky little Olympic mystery, as well as reminder that no source, no matter how official, is infallible.