Today on Oldest Olympians, we are continuing our series of posts that are looking at a single athlete. In this case, our subject is Japanese footballer Motoo Tatsuhara, born January 14, 1913. Like Korean, Japanese is not a language in which we are able to work, but it appears that even if we were fluent, the mystery would remain. 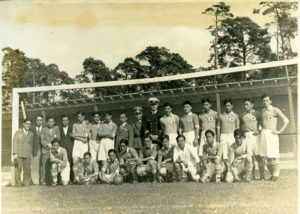 Tatsuhara played football at Waseda University, which was well-known at the time for its sporting culture. He made his début for the national team at the 1934 Far Eastern Championship Games and followed this up with his participation at the 1936 Berlin Olympics. There, Japan defeated Sweden 3-2 in round one, but was then bested 8-0 by the upcoming gold medalist squad from Italy. This was the end of Tatsuhara’s international career, but he continued playing through at least 1942.

After that is where the mystery begins, as there seems to be no further information on his life after World War II. In September 2014, a user added a date of death of November 1984 to Tatsuhara’s Japanese Wikipedia page:

The source, however, was not explicitly stated, although the talk page suggested it might have come from a book. This, however, was contested as being related possibly to a different individual, and the information on the Japanese Wikipedia was removed in April 2016. We here at Oldest Olympians have been unable to confirm this information elsewhere and thus we are taking it to our blog. We know that Tatsuhara is deceased, but the question is whether or not he is the individual who died in November 1984. If not, then when did he die? Like many other Olympians we have profiled, it seems that he has been unfortunately lost to history… and not just in the English language either.