Today on Oldest Olympians we are taking a break from focusing on individual athletes in order to bring back a past feature for a day. Since we concluded our Olympic Missing Links series several months ago, we have come across a handful of new candidates and decided that it was an appropriate time to review them. Thus, today we are once again looking at cases for whom we believed to have identified their date of death but, for whatever reason, we were unable to connect the information, such as obituary or public record, conclusively to the athlete. As always, we present them here not only in the hopes of solving some of these cases, but to continue our commitment to transparency in our research.

The international skiing career of Božena Moserová, born June 30, 1926, was relatively limited, with her most significant appearance coming at the 1948 St. Moritz Olympics. There, she finished 18th in the combined, 19th in the slalom, and 25th in the downhill. She later became an obstetrician and took the married name Žemličková. The Czech-language Wikipedia lists her as dying in either 2016 or 2017, presumably at the age of 90, but although we were able to confirm that she was still alive in the 2000s, we have not been able to verify when (or even if) she died.

Kazuhiko Sugawara, born May 1, 1927, was one of Japan’s top speed skaters in the immediate aftermath of World War II and won numerous national titles in the late 1940s. The peak of his career came in 1952, when he finished 15th and 7th in the 5,000 and 10,000 metres events respectively at the Oslo Olympics. By career he was an engineer at a paper factory, and the Japanese Wikipedia lists him as dying on October 27, 1962 at the age of only 35, due to kidney disease. We have thus far been unable, however, to confirm this information in other sources. 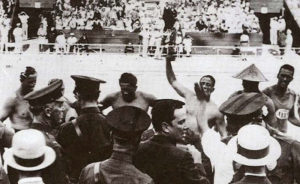 (The Brazilian team attacking the referee from Water Polo Legends)

As is often the case with our Olympic missing links, we know very little about Pedro Theberge, born January 1911, especially as he was a member of a team sport rather than an individual athlete. We know nothing of his life other than that he was a member of Brazil’s water polo squad at the 1932 Los Angeles Olympics, which placed fifth after being suspended for attacking a referee. We were able to find a death record for a Pedro Theberge who died June 24, 1972 in Rio de Janeiro at the age of 63. This would make him born c. 1909 rather than 1911, and thus we cannot conclude for certain that this is the Olympian, despite the fact that his name is not particularly common in Brazil.

To round out our entry today, we have a particularly obscure Olympic contributor: Eulogio Quiroz, born March 11, 1914. Quiroz was slated to represent Peru in boxing’s light-heavyweight division at the 1936 Berlin Olympics, but did not ultimately take part in the competition. His first bout would have been against upcoming gold medalist Roger Michelot of France, however, and thus it seems unlikely that he would have advanced. We do not know anything else about his boxing career or later life, but we did find the record of a Eulogio Quiroz Andrade born March 11, 1913 in Huacho. This individual died October 7, 1976 in Lima, but without further corroborating details on his life, we cannot verify that the person in the record and the Olympian are one and the same, despite how likely it seems.

That is it for today, but we hope that you will come back next week, when we will have even more Olympic mysteries to share with you all!